Why does capillary action occur better in narrow tubes than in wide tubes?

We all have seen the meniscus of a small graduated cylinder in the lab. The reasons for the occurrence of capillary action are clear, but why does it occur more profusely in smaller-rimmed containers?

You have to look which forces act where. You have a force that tries pull the liquid up the capillary, which stems from the gain in energy due to adhesion. At the same time, however, gravity acts against this force. In equilibrium, both forces have the same value:

Which leads to the formula presented by Babounet in another answer: 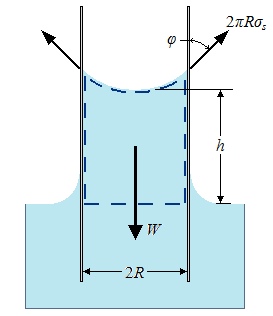 According to the Jurin's Law

So, the $h$ is inversly proportional to $r$. In other words, the larger the tube, the lower the liquid climbs.