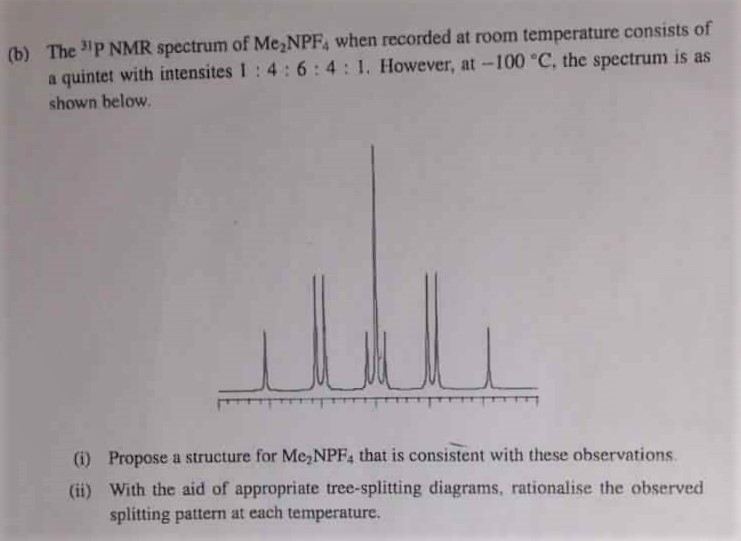 I think it has something to do with the fact that at high temperature it interconverts and so all the coupling constants are the same hence quintet but at lower temperatures the frequency of the rotation is less than the sample rate and so there are different coupling constants for the planar and axial fluorine atoms. We have two structures to consider; 3 planar-1 axial and 2 planar-2 axial. If my line of thought it correct the P-31 NMR spectra for each of these should superimpose to give the spectrum shown. 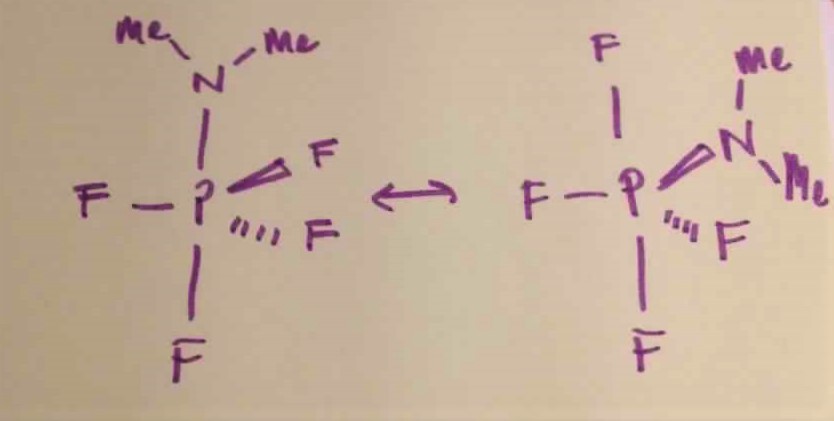 But I'm lost because when I draw my diagrams they don't match the spectrum shown, I end up with a much more complicated splitting pattern.

You are certainly thinking in the right direction. Fluorine strongly prefers the axial position (for reasons described here), so at low temperature, the isomer that you've drawn on the right (2 axial and 2 equatorial fluorines) is the only isomer present. As a result we have an $\ce{A2B2X}$ spectrum. The 2 equivalent equatorial fluorines (spin = 1/2) split the phosphorous signal into a triplet. Each line of this triplet is further split into a triplet by the 2 equivalent axial fluorine's. BTW, the same reasoning that explains fluorines axial preference, also explains why generally $\ce{J(P-F)_{equatorial}}$ > $\ce{J(P-F)_{axial}}$

68
Why does F replace the axial bond in PCl5?

6
How to assign the signals in the H-NMR of Aspirin?
12
19F NMR of hexafluorobromine(VII) cation
6
Interchange of axial and equatorial groups in Me2NPF4
4
How to explain two NMR spectra of the (allegedly) same compound with slightly different shifts?
19
Multiplet shape in proton NMR of morpholines
3
Axial Equatorial NMR graph difference