I do not understand why the 3rd canonical form of propenal has the oxygen atom donating an electon.

Oxygen in electronagetive so instead of taking electrons why is it giving?

Maybe this why it is most unstable but how is it even formed ??

What you have to understand about resonance structures is that they do not actually exist in the molecule. The separate resonance structures are never formed on their own but they can be used to represent a delocalised bonding situation, more accurately described using molecular orbitals.

In the case of propenal the $\pi$ MOs result from the overlap of four $p$ orbitals on the four atoms in the chain. The two occupied $\pi$ MOs show how most of the electron density is between C1 and C2, and C3 and the oxygen but there is also significant electron density between C2 and C3. This reflects the different positions of the double bonds shown in the resonance contributors of propenal. 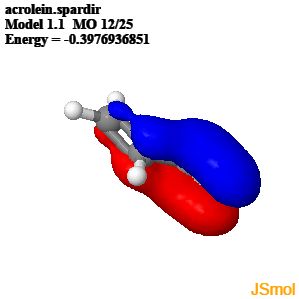 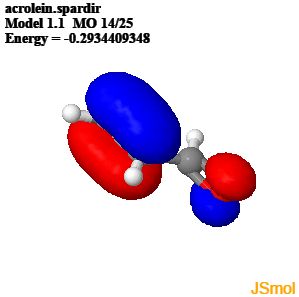 Not the answer you're looking for? Browse other questions tagged resonance stability or ask your own question.

13
Competing resonance and inductive effects in a substituted benzene
15
Oxygen or carbon with a positive charge? (comparison of canonical structures)
7
Why is there a need for resonance?
4
Conversion of isonitrile (isocyanide) group into cyanide group?
2
Forming the resonance structures for the nitrite anion
4
Resonance of carbonyl