How does Resonance stabilize a molecule?

How does resonance lower the potential energy of the molecule? Take $\ce{O3}$ as an example.

With the concept Resonance you can describe delocalized electrons in some molecules. To go with your example:

Imagine the ozone molecule to be frozen in one of those two states. Positive and negative charges are localized, which is generally connected to a higher energy, i.e. a more reactive species. This would be an extreme case for ozone - in reality those electrons will be delocalized all over the molecule. So, what is the reason that molecules with localized electrons/charges have a higher total energy and are, hence, less stable?

Maybe you remember the Particle in a box. I wont go into the quantum chemistry here, but one of the take-away-messages is, that the energy for particles in a infinite square well, which is a very rough approximation of the potential in which the outer electrons reside in, does decrease with $ L^{-2} $. $L$ is the size of the box in which the particle can exist. So, the more delocalized the electrons are, the less total energy in a system.

With this, to correct you question a little bit: Resonance is not the reason why molecules are more stable, it is a concept which describes the bonding in a molecule, in which electrons are delocalized, better than a single Lewis Structure.

I would like to have a feedback if this answer is somewhat understandable.

The problem arises because, when we draw simple pictures of the bonding in molecules, we assume each bond consists of two shared electrons. So we draw benzene like this:

This picture neatly accounts for all the electrons in the C-C bonds and is often good enough for understanding and tracking the electrons and bonds in reaction mechanisms. But the picture is clearly wrong as it doesn't match the known properties of benzene: in particular all the bonds in benzene are the same length. The stability of benzene is also understated compared to the (hypothetical) molecule with isolated double bond. The real reasons for this are pretty complex and involve all sorts of quantum-mechanical molecular orbital gobbledygook. But this is way too complex to be useful when drawing simple molecular pictures or describing reactions or bonding.

To avoid this problem and to help retain the simple picture we add the idea of resonance. This allows us to use the simple picture where a line representing a bond still means two shared electrons but we have to draw more than one structure to capture the real molecular structure. We say the multiple structures "resonate" but this is really just shorthand for saying that the real structure is an in-between mix of the resonance structures we draw. For benzene we draw like this:

The problem with this structure is that it is is less useful most of the time than the (incorrect) structures with single and double bonds as it makes counting electrons in bonds less clear and this is annoying when trying to follow reaction mechanisms.

So resonance is basically a pragmatic way to retain simplistic pictures of bonding in molecules while recognising that that simplistic pictures is often a poor representation of reality. And thereby avoiding having to do complicated quantum stuff with orbitals every time you want to understand a molecular structure or reaction.

After that ridiculously long explanation of what a covalent bond is, let us get to the essence of it. The reason why a covalent bond "works" is because electrons are holding atoms 'together'. Without the electrons, the atoms would not have anything to 'bind' them. In essence, two electrons are holding two atoms in place, thereby bringing stability, and causing a lowering of potential energy of the system. 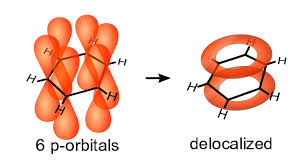 Since the electron belongs to the orbitals of many other atoms, and not only one or two (as in the case of the H-H covalent bond), it holds all these six carbon atoms in place, and thereby acts as a bond between the six carbon atoms, which in turn brings stability to the system and lowers its potential energy.

Why doesn't an electron in an atom fall into the nucleus ?

The picture we often have of electrons as small objects circling a nucleus in well defined "orbits" is actually quite wrong. The positions of these electrons at any given time are not well-defined, but we CAN figure out the volume of space where we are likely to find a given electron if we do an experiment to look. For example, the electron in a hydrogen atom likes to occupy a spherical volume surrounding the proton. If you think of the proton as a grain of salt, then the electron is about equally likely to be found anywhere inside a ten foot radius sphere surrounding this grain, kind of like a cloud.

The weird thing about that cloud is that its spread in space is related to the spread of possible momenta (or velocities) of the electron. So here's the key point, which we won't pretend to explain here. The more squashed in the cloud gets, the more spread out the range of momenta has to get. That's called Heisenberg's uncertainty principle. Big momenta mean big kinetic energies. So the cloud can lower its potential energy by squishing in closer to the nucleus, but when it squishes in too far its kinetic energy goes up more than its potential energy goes down. So it settles at a happy medium, and that gives the cloud and thus the atom its size. (from https://van.physics.illinois.edu/qa/listing.php?id=1226)

4
Does resonance affect the polarity of the molecule?
1
How to draw resonance structures for CH3COCN
4
Is resonance always stabilizing
11
Does benzene structure stand for a single resonance form or the whole molecule?
8
What is "dancing resonance"?
2
Does triphenylphosphine show resonance?
9
Why does HNO2 not have resonance?
3
How do we find hybridization when molecule has resonance?