Using MO theory, give an explanation for the C-C bond length in cyanogen

1. The problem statement, all variables and given/known data

2. The attempt at a solution

I know that the MO diagram for CN- is this: 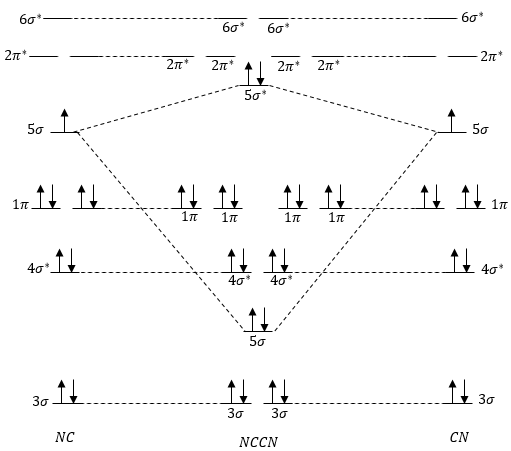 Not sure if this is necessary but I have drawn the following resonance structures:

I think that structure (I) contributes the most as structures (II) and (III) have a positive charge on the nitrogen.

I think the C-C bond in cyanogen is shorter than the "usual" C-C bond lengths due to delocalisation across it but I don't know how to explain this using Molecular Orbital theory.

See my answer to your question on methyl vinyl ether for some background on molecular orbital (MO) theory.

As I mentioned in my other answer, we typically focus on the delocalized molecular orbitals formed by combining the p orbitals and disregard the sigma system (usually) when we create our MOs. Disregarding the sigma system usually simplifies matters.

There are a number of ways to create the MO diagram for butadiene or cyanogen, but all of them will have the common theme of mixing 4 p atomic orbitals and generating 4 molecular orbitals. Here is one way to do it, let's start by mixing 2 p orbital to create the MO's for ethylene (or nitrile). 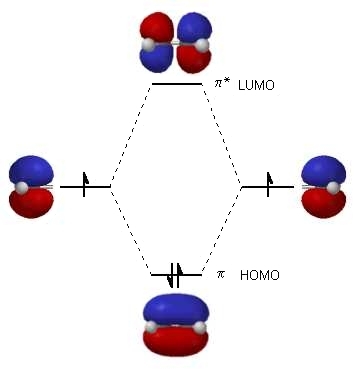 Notice how $\ce{\Psi_1}$ has overlap between the orbitals on the two middle carbons. This indicates overlap and a higher bond order between these 2 carbons, just as your resonance structures II and II indicate. Just like in butadiene, this carbon-carbon bond has some double bond character and, therefore there is a higher barrier to rotation about it then you might otherwise expect.

This feature of cyanogen was already mentioned in the comment by Geoff to the Question "How many electrons are there in the pi-system of cyanogen?". (And I was very tempted to vote to close as a duplicate.)

Your resonance structures are correct and it is noteworthy, while I might be the predominant one, the other two are still considerably influencing the electronic structure. The problem with this is, that you cannot sufficiently express delocalisation in Lewis terms. A molecular orbitals approach is necessary to understand the bonding situations. Below you can find the complete valence MO scheme of cyanogen, which I repost updated from the linked question. 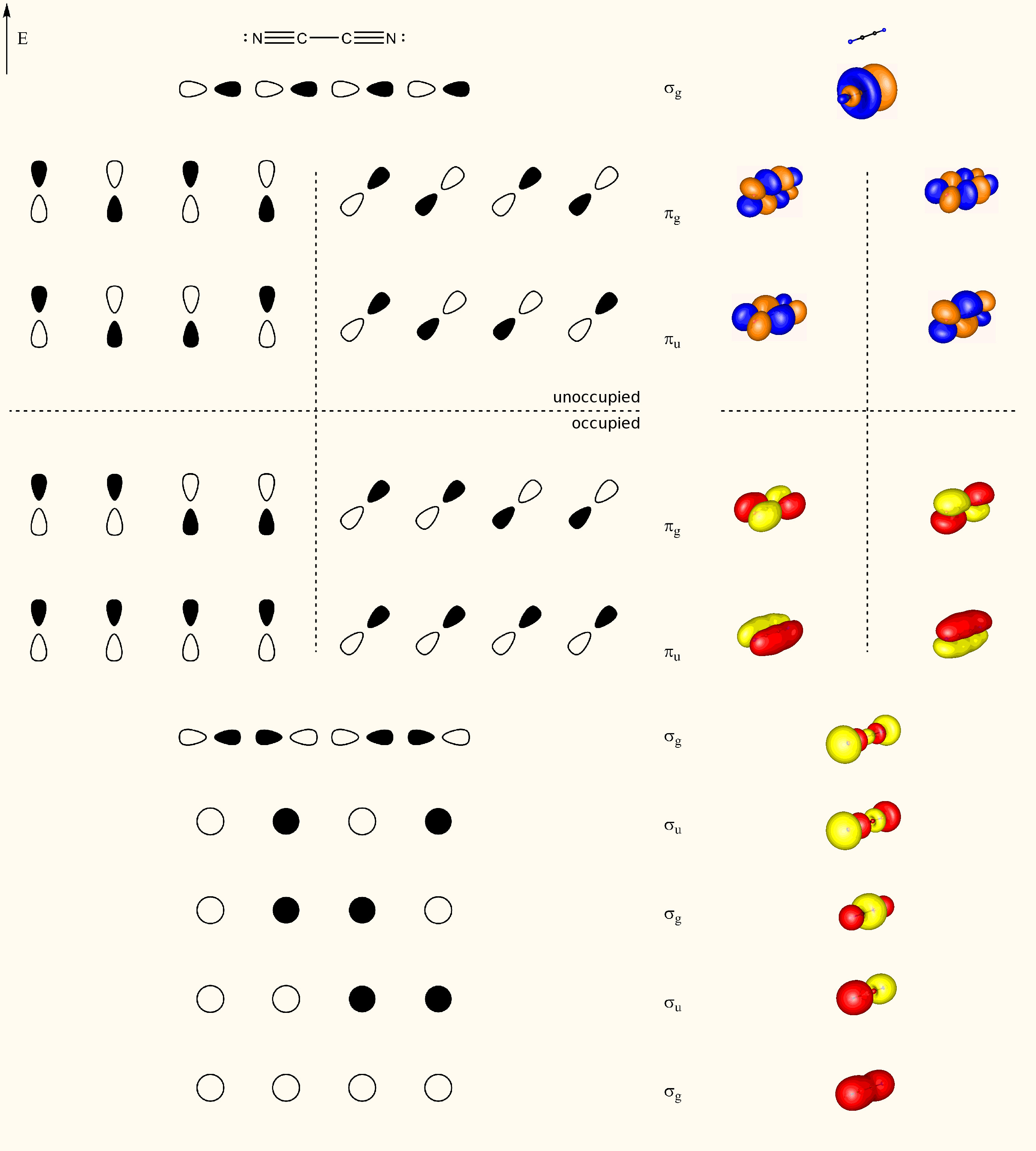 Not the answer you're looking for? Browse other questions tagged inorganic-chemistry bond molecules molecular-orbital-theory resonance or ask your own question.

3
How many electrons are there in the pi-system of cyanogen?
3
Draw a simplified MO diagram for the pi system of Methyl vinyl ether

3
Draw a simplified MO diagram for the pi system of Methyl vinyl ether
2
MO for $N_2^{2-}$
7
Do bond lengths vary across molecules of the same kind?
2
Forming the resonance structures for the nitrite anion
10
C-F bond lengths of octafluoropropane using Bent's rule
3
Which has the greater N–O bond length, NO₂⁻ or NO₃⁻?
7
Comparison of C-Cl bond length in CH3Cl and CF3Cl
1
Carbocation formation and stability from bromo compounds