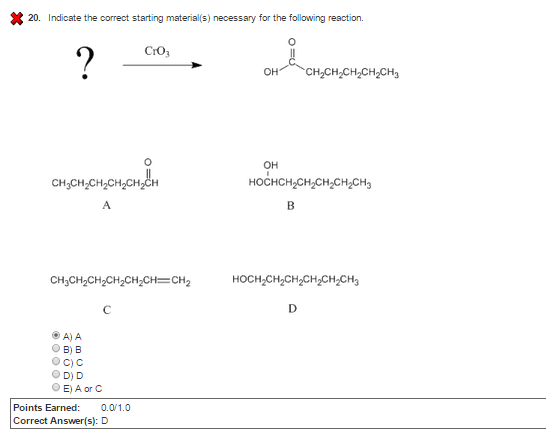 The answer has to be both A and D. Chromic acid is a strong oxidizer and will take both aldehydes and primary alcohols to carboxylic acids.

However the computer thinks otherwise. Am I just missing something really simple here?

There are many $\ce{CrO3}$ oxidation reagents (Jones, Sarett, Collins, PCC, etc.), however, most are selective and stop the oxidation of a primary alcohol at the aldehyde stage. On the other hand, the Jones reagent is relatively unselective and will oxidize a primary alcohol to the corresponding carboxylic acid - if enough reagent is present. It takes two-thirds of an equivalent of Jones reagent to oxidize one equivalent of the alcohol to the aldehyde and an additional two-thirds equivalent to oxidize the aldehyde to the acid. Also the Jones oxidation is run under acidic conditions (typically dilute sulfuric acid).

I would have though that A, B (the gem-diol will equilibrate with the aldehyde under acidic conditions) and D were correct answers. It seems like the computer answer is either in error or it is a "trick" question (seems unlikely for computer-based learning). The "trick" would be that since an excess of reagent was not specified only 1 equivalent is assumed. Therefore there is not enough reagent to carry out two sequential oxidations; as a consequence only the aldehyde or gem-diol could be completely oxidized with one equivalent of reagent. But then A or B is not an acceptable answer either.