Is the smallest or largest diameter important for the color of a molecule?

I learned that phenol absorbs longer wavelengths than benzene because the electron cloud is bigger.

What determines which wavelengths of light are absorbed by a molecule?
This is controlled by the energy separation (energy gap) between the highest energy orbital that contains an electron (the HOMO or highest occupied molecular orbital) and the lowest energy orbital that an electron can be promoted to (the LUMO or lowest unoccupied molecular orbital). If this energy gap falls in the visible range, then the molecule will appear colored to the eye when the molecule absorbs light at the wavelength that corresponds to the energy gap (e.g. when a photon is absorbed that promotes an electron from the HOMO to the LUMO) .

Molecules like 2,2-dimethylpropane contain only sigma bonds. The energy gap in typical sigma bonds is very large meaning that it takes a lot of energy to promote an electron from the HOMO to the LUMO. The amount of energy required typically falls in the ultra-violet region, outside the visible range; therefore these molecules are usually colorless since they transmit all visible wavelengths.

Molecules containing pi bonds have smaller HOMO-LUMO energy gaps than molecules with just sigma bonds. If there are enough pi bonds and they are conjugated then the gap can be small enough that light in the visible range can be absorbed and make the molecule appear colored. Here is a diagram showing how the energy gap decreases as we increase the length of our conjugated pi system. 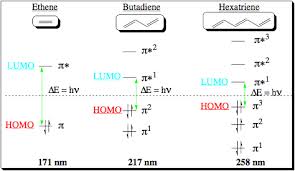 Even with 1,3,5-hexatriene the light absorption at 258 nm is still outside the visible range, so the molecule will not be colored. But as we continue to extend the conjugation, eventually the molecule will absorb light around 400-500 nm, the blue light range. As the molecule absorbs blue light it will appear yellow. In addition to pi conjugation, certain substituents such as the nitro group and the carbonyl, to just name two, can also serve to extend the conjugation path in a molecule.

The molecule you asked about, penta-1,2,3,4-tetraene, looks roughly like this.

If we examine it closely, we'll notice that the orbitals really look like those in two distinct (orthogonal) 1,3-butadiene molecules. As the chart above shows, 1,3-butadiene does not absorb in the visible range. Nonetheless, because penta-1,2,3,4-tetraene does have an extended pi system it will have a smaller HOMO-LUMO gap than 2,2-dimethylpropane and will absorb light at longer ultra-violet wavelengths (lower energy) than 2,2-dimethylpropane.

Not the answer you're looking for? Browse other questions tagged organic-chemistry electrons energy or ask your own question.

4
Which C-C bond would break first, the one in ethane, or 2,2-dimethylpropane?
2
X-ray fluorescence: where do expelled electrons go?
5
Energy required to break the "delocalised electron cloud" of benzene
2
What is the reason for the acidic character in phenols?
11
What is the rationale of the IUPAC name for DDT?
2
Why is OH group activating towards electrophilic aromatic substitution?
2
London/dispersion forces
3
Reactivity of benzyl halides towards nucleophilic substitution