Does hydrogen bonding strength correspond to Brønsted basicity in a given medium?

Also why do we depict acid base reactions as concerted? Is it because the time scale is extremely small for proton transfer reactions, so who cares if it's actually stepwise or concerted?

@Dissenter, you really need to stop asking questions like this. Once again you point out that the emperor has no clothes! :)

It turns out that the mechanism of simple proton transfer is an active area of investigation. There is not a single yes or no answer that would adequately address your questions. But if this truth were told in the introductory texts who would continue on when the answer to seemingly simple questions leads to such a morass? Instead, particularly in introductory circumstances, there is a gentlemen's agreement of sorts that we will simply say that the emperor's clothes are the finest we've seen.

Let's look at your two questions in reverse order.

why do we depict acid base reactions as concerted?

In many introductory texts, and even some that are for advanced courses, proton transfer is presented as a concerted process based largely on Occam's razor (the simplest explanation is often the correct explanation). However, enough experiments in this area have been run that I think it would be fair to say that a stepwise mechanism is now favored, but by no means mandated for all proton transfers (we'll see why some proton transfers proceed in a concerted fashion below). The stepwise mechanism proceeds as follows:

Does hydrogen bonding strength correlate with Brønsted basicity in a given medium?

If we throw out cases where geometry interferes with hydrogen bonding (e.g. one example would be where steric factors preclude close approach or proper alignment of the species involved), then it would not be unreasonable to expect some correlation between hydrogen bond strength and the pKa difference between the two species involved. There is certainly experimental evidence to support this view. However, it has been found that if we step back and examine a larger range of pKa differences, the correlation breaks down.

Here is a diagram showing how the rate of proton transfers might change as a function of the pKa difference between the two species involved. 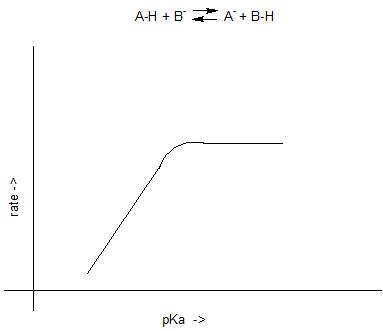 If we look at a small portion of the plot, the part at low pKa, we could fairly easily convince ourselves that there is a linear correlation. But eventually as the pKa becomes large, the rate of proton transfer becomes diffusion controlled and insensitive to any further increase in the pKa. The same concept applies to hydrogen bonding. There could be reactions (acid-base proton transfers for example) where there is no activated process, the reaction is diffusion controlled; as a consequence we cannot expect to accurately measure or compare hydrogen bond strengths as a function of Brønsted basicity differences in such a regime.

why do we depict acid base reactions as concerted?

To keep it simple in introductory classes. It turns out that many acid-base proton transfers are not concerted, but rather involve a multi-step process. Some other proton transfers, for example those involved in diffusion controlled reactions, are probably concerted. This is still an active area of research.

Does hydrogen bonding strength correlate with Brønsted basicity in a given medium?

There are several methods which can be used to compare the Brønsted-Lowry (proton-transfer) basicity and the hydrogen bond basicity.

As for your second question, proton transfer is not going to occur step-wise because an unsolvated proton is very unstable; loss of a proton is always associated with formation of a charged complex in solution

Not the answer you're looking for? Browse other questions tagged acid-base hydrogen-bond or ask your own question.