A professor of mine noted that when he was in school, microscopes weren't powerful enough to resolve certain things (I forgot what it was). But current microscopes are powerful enough. Extrapolating from this trend, he hypothesized that by the time we were his age, we would be able to see atoms.

Wait. Seeing atoms? Do we expect to see discrete little dots for electrons (I don't think so)? What exactly can we expect to "see," if anything at all?

Yes, we can definitely see atoms in modern microscopes. I'll try not to get deep into the subject of "seeing", but I will note that most people say they are seeing when they use their eyes to observe objects. That is, they are using an optical system (eye) consisting of a lens and a detector (retina) and some image processing carried out by a computer (brain). Thus, any instrument which uses some sort of detector and a computer to turn the signals of that detector into an image we feel comfortable looking at qualifies to me as "seeing in a microscope." If you're comfortable with that then read on.

My favorite microscope which is capable of seeing atoms is the transmission electron microscope (TEM). Using a high quality TEM, we can easily resolve objects around an angstrom in size, which is the distance between atoms. To image a single atom, you also need to have a sample which is only a single atom thick at some point. This is tough to accomplish but can be done. Today, images of graphene provide arguably the best "single atom" TEM images. A seminal paper is here (paywall). You can also search the internet for graphene images such as this.

In the links above, the images show the shapes of atoms as little blobs, and to a large extent the blobs are more a description of the microscope's ability to focus rather than the shape of the atom itself. However, the atomic force microscope (AFM) excels at seeing the electrons at the surface of an atom. With AFM, researchers are even able to image the chemical bonds of molecules sitting on a substrate. In this case, the image shows the bonds as rods and the atom centers are not really visible. Chemistry textbooks often show the "shapes" of atoms by drawing the electron orbitals, so in a sense these rods are the shapes of these atoms too.

This just points up that the "shape" of atoms is a non-trivial subject, which is very dependent on how you look at them.

X-rays and beams of electrons both have about the right wavelengths to detect atoms and some microscopes based on either can produce images that resolve to show atomic positions. Transmission electron microscopes can "see" individual atoms in some circumstance. More importantly, the structure of crystals can be resolved by interpreting the diffraction of x-rays from the crystal lattice, providing detailed analysis of the 3-dimensional structure of crystals. This is almost a routine way of determining the structures of molecules as complex as proteins. In a sense this is "seeing" atoms (more strictly it is detecting the electron density). But it is a very indirect way of "seeing" and, strictly, you are detecting using a large assemblage of atoms not just one at a time.

There are modern techniques that allow individual atoms to be detected and even manipulated. These are based on the use of very small needles with atom-sized tips. Atomic force microscopy or scanning tunnelling microscopy and other variants can use the controlled movement of these fine needles to measure the force of interaction between the atoms on the tip of the needle and the molecules or atoms on a surface. So what you are "seeing" is the atomic forces generated by the electron clouds in individual atoms the they interact with something else that is also atom-sized.

For example this image shows a sheet of graphene: 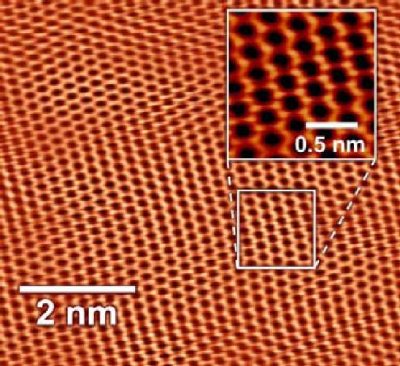 And this image shows a single molecule of pentacene (with a model of the structure shown below the actual image): 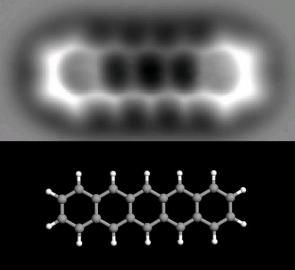 There is even an amusing animated video by IBM (who invented the atomic force microscopy technique) showing a story told by manipulating the positions of carbon monoxide molecules on a surface.

These techniques have even been used to understand reaction mechanisms by observing what happens to individual molecules.

So we can "see" molecules at atoms by using devices that can measure atomic forces very precisely. In that sense we can see what they "look" like at least from the point of view of other atoms interacting with them.

Since the nucleus is concealed within the much larger electron cloud, the shape of an atom is the shape of its orbitals; the 3D pattern of bonds in crystals, etc. So, if we could somehow see one without using light, an atom would "look like" its electron wavefunction, its surrounding standing-wave of probability.

If I understand it right, the wavefunction axes of an individual atom in space have uncertain direction. Therefore unless we somehow probe an atom and "collapse" its orientation, the above wave functions should be seen as smeared-out spherically.

On the other hand, everyone in the 1950s knew that atoms look like this.

The common "three-planet solar system" image has ended up deeply embedded in American pop-culture. It's wrong, and should be replaced by various plots of 2D wavefunctions, but just try to convince the public! Heh, also, radio waves don't come out of the tips of broadcasting towers. And, falling raindrops don't have sharp points. Instead they're spheres!

1
How will these hydrogen atoms interact?
16
Are atoms really round?
2
How are atoms manipulated?
6
Do hybrid orbitals exist in unbonded molecules? What would they look like?
3
Energy levels in non-hydrogen-like atoms
1
What does “atoms make no compromises” mean?
3
How many atoms are represented in this equation?