All of us are aware of the importance of the catalysts in bio-chemistry. For a high school learner like me, catalysts ,and therefore, enzymes play a bridge-like role that connect high school bio to high school chemistry.

Yet, I got baffled about the two common energy profiles drawn for an anonymous reaction with a presence of a catalyst. The question may seem rudimentary, I agree, but the possible answers to my question were too technical for me to understand.
One of the energy profiles had several curves in the pathway for $E$, and the other one has only one curve in the pathway where the catalyst should have affected. 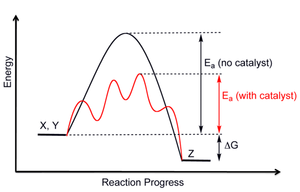 My guess is that the first energy profile is about a net change in $E_\mathrm{a}$ but the second one demonstrates the reality when an exothermic reaction occurs.
Now, here are the questions:

The upper graph is just the most simple way to visualize the effect of a catalyst on a reaction $\ce{S -> P}$:

The activation energy is lowered.

The activation energy for the reaction in that direction is the difference of the energies of the starting material $S$ and a transition state $TS^\#$.

Since it is the same starting marterial in the presence or absence of the catalyst, the energy of the transition state is different.

Can the same transition state have two different energies - just through the remote distance magical action of a catalyst located somewhere? Probably not!

It is much more plausible that - in the absence and presence of a catalyst - two completely different (different in structure and different in energy) transition states are involved.

Exactly this situation is described in the second graph!

The catalyst "reacts" with the starting material, either by forming a covalent bond, by hydrogen bonding, etc. and thus opens a different reaction channel with different intermediates and a transition state not found in in the non-catalyzed reaction.

In the end, the same product $P$ is formed and the catalyst is regenerated, but this doesn't mean that the catalyst wasn't heavily involved in the reaction going on.

1# Curve 1 is just for a simple case where it's showing the comparison between a theoretical pathway for a catalyzed and non-catalyzed reaction but it has an another significant which I will discuss in part two.
2# How many of these curves can occur: Infinite (Theoretically) but in practical case you have to consider all types of possible elementary reaction in your model. An elementary reaction is a reaction which can occur in one step or the reactant, product and TS has well defined position on potential energy surface. For example if you have a simple ketone hydrogenation reaction, you can get an overall energy profile for gas phase reaction but on a catalytic surface there are lots of possibilities. At first the ketone and hydrogen will adsorb on the surface and then 1st hydrogen addition can occur either on C of the ketone group or on the hydrogen of the ketone group. They are intuitively main reaction pathway but there can be much more.

In the above image I was working on LA hydrogenation and you can see there are two different pathway for the hydrogenation and there might be some other more pathway. And if you want to capture the real chemistry you have to make sure you are including all important intermediates. So your energy profile may look like this 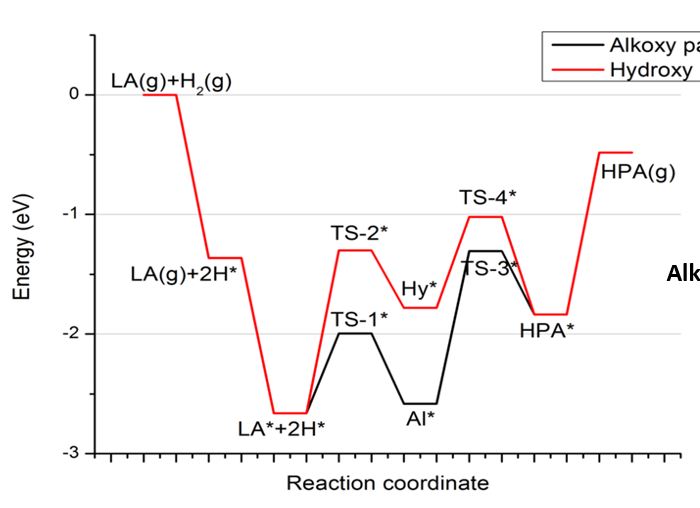 Here the picture becomes quite complicated with lots of elementary reaction. To determine the overall activation energy of a catalyzed reaction scientists follow two methods
method-1: Energetic span theory: Given by Shaik et al. I am adding the link to that paper here, http://pubs.acs.org/doi/ipdf/10.1021/ar1000956

A reaction involving more than one elementary step has one or more intermediates being formed which, in turn, means there is more than one energy barrier to overcome. In other words, there is more than one transition state lying on the reaction pathway. As it is intuitive that pushing over an energy barrier or passing through a transition state peak would entail the highest energy, it becomes clear that it would be the slowest step in a reaction pathway. However, when more than one such barrier is to be crossed, it becomes important to recognize the highest barrier which will determine the rate of the reaction. This step of the reaction whose rate determines the overall rate of reaction is known as rate determining step or rate limiting step. The height of energy barrier is always measured relative to the energy of the reactant or starting material. Different possibilities have been shown in figure 6

From the link you gave on energy profile i found this. Basically there is no "net change" in $E_{a}$ . In the first graph in question the curve which is at the top is the representing how the reaction proceeds without a catalyst and the one below is of the reaction with catalyst. In the second graph there are 4 intermediate reactions/transition states before the product is formed. Hence you have 4 peaks of different activation energy as shown.

A catalyst basically provides alternate routes to a reaction by forming the "transition/metastable/intermediate state at a lower energy than the original reaction. You will study later that this has to do with basic Collision theory and molecular dynamics.

In the given graphs a catalyst can make the R->P through just one route where only one transition happens (as in the graph 1) or for 4(or even more) transition states (as in the graph 2). For one set of conditions(P,T,V etc) I am guessing the number of these peaks will be unique. It is also possible that for a certain catalyst and reactant the number of peaks / intermediate states is constant.

Not the answer you're looking for? Browse other questions tagged physical-chemistry thermodynamics catalysis or ask your own question.

1
Does the catalyst alter the Potential energy Surface?
4
How does a catalyst accelerate both forward/reverse reactions simultaneously?
3
Physical Explanation for variation of Gibbs Free Energy with Temperature and Pressure
3
Catalyst with zero order kinetics
0
How do catalysts provide alternative routes for reactions?