Is hydrogen bonding generally defined to include only three period two elements?

Traditionally, hydrogen bonding has been defined to only include interactions between a positively polarized hydrogen and three period-two elements: nitrogen, oxygen, and fluorine.

Why was this definition proposed? A common question is why can't chlorine, by the aforementioned definition, hydrogen bond?

Does this have anything to do with hard and soft acid-base theory? Hydrogen is a hard acid, and chlorine is a comparatively soft base ... and the period two elements are all relatively hard?

For example, in table 7 and the discussion thereof in Hydrogen Bonding Annual Review of Physical Chemistry Vol. 22: 347-385 the hydrogen bonding in the following species are discussed:

as well as related neutral radicals.

Hydrogen bonds in $\ce{S-H}$ containing compounds are discussed. These are just examples, others that do not involve $\ce{F}$, $\ce{O}$ or $\ce{N}$ are also discussed.

The hydrogen bond is an attractive interaction between a hydrogen atom from a molecule or a molecular fragment $\ce{X-H}$ in which $\ce{X}$ is more electronegative than $\ce{H}$, and an atom or a group of atoms in the same or a different molecule, in which there is evidence of bond formation.

The evidence for hydrogen bond formation may be experimental or theoretical, or ideally, a combination of both. Some criteria useful as evidence and some typical characteristics for hydrogen bonding, not necessarily exclusive, are listed below, numbered E# and C#, respectively. The greater the number of criteria satisfied, the more reliable is the characterization as a hydrogen bond.

2.2 Some characteristics of hydrogen bonds

My book* has this graph of boiling points of various hydrogen-element compounds. $\ce{NH3}$, $\ce{H2O}$, and $\ce{HF}$ are the only ones that violate the trend, so it would make a bit of sense to call the interaction responsible only for those three and nothing else. 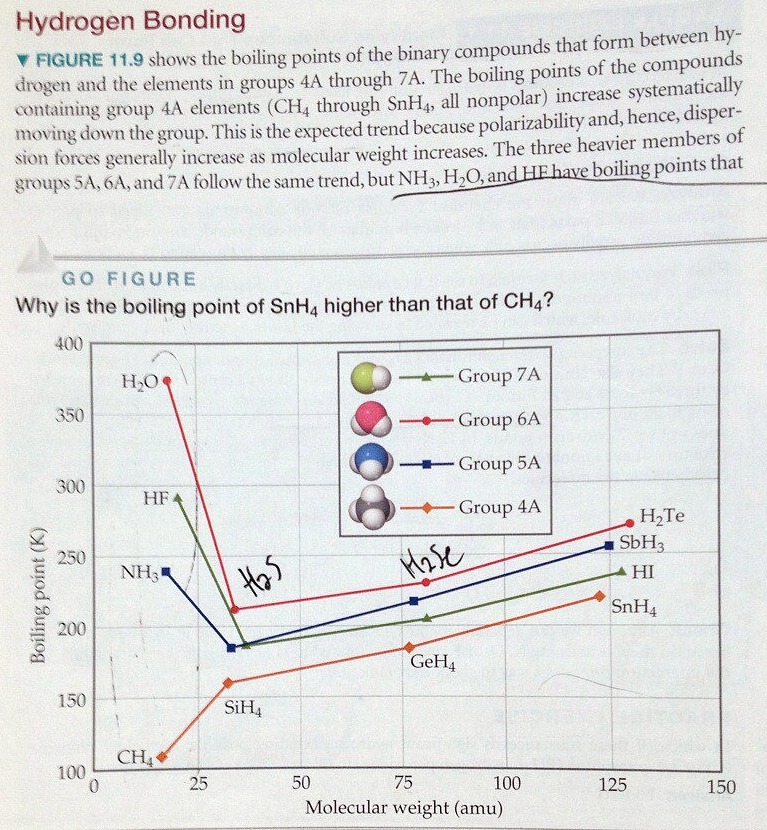 In a rather different vein, hydrogen in water can donate weak hydrogen bonds to ... carbon! The standard electrostatic model cannot work, but hydrogen bonding can also be rendered as a molecular orbital interaction and that does work with the methane-water interaction (Russ. J. Phys. Chem. 2016, 90 (10), 1978–1985). Not just a chemical curiosity, this interaction contributes to the stability of the methane-water clathrate found on sea bottoms and in natural gas processing (see methane clathrate on Wikipedia).

Not the answer you're looking for? Browse other questions tagged elements hydrogen-bond hsab or ask your own question.