What type of compound/element might be in these glowing tiles

I saw these tiles and these as well while surfing the net, they obiviously glow when their electrons are exited to a higher state and then de-exite over a long period to give off visible light.

Glow in the dark materials are materials that exhibit phosphorescence. The most common materials used for this effect are zinc sulfide and strontium aluminate, doped with various elements that affect the colour of luminescence.

Phosphorescence is similar to fluorescence, where an electron is excited to a higher energy state, but instead of dropping back immediately by emitting a photon, an intersystem crossing event occurs where the electron's spin flips resulting in a triplet state (S=0 to S=1 in the figure). Because the electron has the same spin as the other electron it left behind in the ground state, the transition to the ground state is forbidden and thus occurs much more slowly. In practice, a given material usually exhibits both fluorescence and phosphorescence. Materials that are very phosphorescent have a high probability of intersystem crossing so that when light is shined on them, a large population builds up in triplet states that will release light slowly. What makes a given material have a high intersystem crossing probability is pretty complicated, but it tends to be higher in molecules with large atoms—even things like fused silica glasses are phosphorescent, but very weakly. 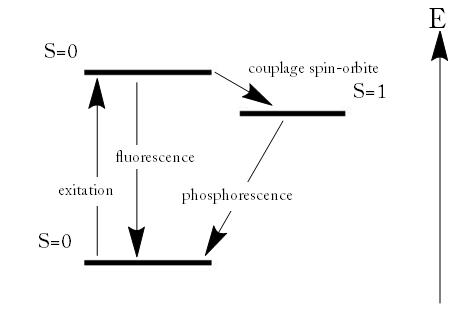 Not the answer you're looking for? Browse other questions tagged energy elements or ask your own question.

4
Calculating laser wavelength/power to cause emission of light in a gas?
4
Why does attraction always cause release of energy making the system more stable?
1
Spectroscopy and Excitation of Electrons
0
Teaching: Two elements that make XY2 and XY4 molecules
4
How does an energy input actually change a molecule?