Why do only ketones exhibit keto-enol tautomerism?

Why can't esters or acids or their derivatives exhibit tautomerism? I mean if they did, then there would be a conjugation between lone pair electrons of oxygen and pi electrons adding to their stability. Then why don't they exhibit similar tautomerism?

Esters, amides and acids do exhibit tautomerization to the enol form, but the enol content in these compounds is just much less than that found with aldehydes and ketones. Why?

The keto-enol process is an equilibrium; to understand where an equilibrium lies, we must compare the relative stabilities of the products (enol) and reactants (carbonyl compound).

Let's compare some resonance structures for an ester and a ketone and their corresponding enols. 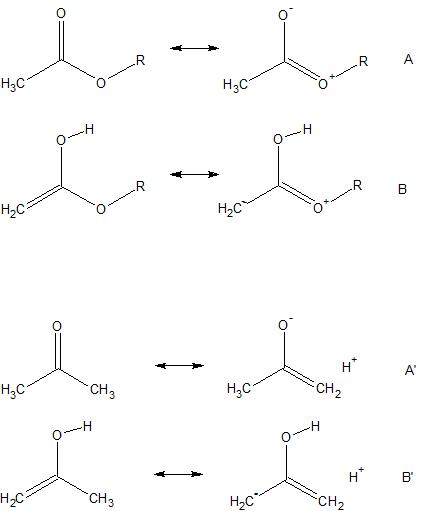 The ester is stabilized by resonance structures such as A, whereas in the case of the ketone, the analogous resonsnce structure A' contributes, but not nearly as much; so ester carbonyls are stabilized compared to ketone carbonyls.