It depends a bit on how you handle the $\ce{CH3}$ group. Usually, you assume free rotation, so it's effectively a sphere. In that case, $\ce{CH3CN}$ is linear and asymmetric. Since the two ends are different, that places it in the $C_{\infty v}$ point group.

Typically, though, we don't assign molecular orbitals using $C_{\infty v}$ or $D_{\infty h}$ representations. It's hard to do the math when using an infinite rotation axis, so we usually use $C_{2v}$ and $D_{2h}$ instead.

That is, you'll want to use the irreducible representations from $C_{2v}$ for acetonitrile.

I am afraid I disagree with Geoff's assignment of acetonitrile to the point group $C_{\infty v}$ and "approximation" with $C_{2v}$, so I will make another attempt to answer this question. The way I have structured this answer, the resources I used, and the level of detail included follow a similar question on this site.

First you need to know the geometrical structure of your compound. This can be found easily from Wikipedia. The image is reproduced here. 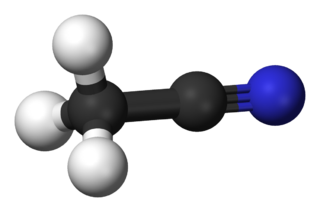 Then you need to find the point group of acetonitrile. This can be done by following flow charts, one of which is available here. While it may be a little difficult at the beginning, with some practise you can look at a molecule and determine its point group accurately, so it is worth working through the flow chart for a range of molecules until you are confident with this. There are other arrangements of this flow chart, but all flow charts should give you the same result, so use the one provided in your course if possible.

With the flow chart I have linked to, we go through these steps (if you have a flow chart organised differently, you will encounter the same steps, but likely in a slightly different order - check this is the case!):

Molecular orbitals are constructed by making combinations of atomic orbitals. Which means that, a logical next step is to consider all the valence atomic orbitals (VAOs) on all the atoms of acetonitrile.

To help us talk about VAOs, I have put numbers on all the atoms. 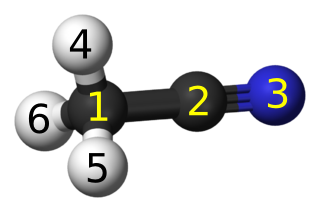 When we try to tackle these types of problems, it is common to construct symmetry sets of atomic orbitals that would transform in the same way under the operations of the point group of the molecule. You will also notice that you cannot use any of the operations of the group to transform certain atomic orbitals on the same atom into each other (cannot transform $2s$ to $2p$, cannot transform $2p_x$ to $2p_z$, etc), so these should be considered as separate sets. The $p_x$ and $p_y$ orbitals are mixed by the rotations and reflections of the group, so we should consider them as one symmetry set.

In acetonitrile, there is only one nitrogen, so we have to consider as separate sets:

Carbon 1 and carbon 2, though both carbons, cannot be transformed from one to another, and your chemical intuition should also tell you they are different carbons because they have different bonds attached to them, so they are also in separate sets of their own. The three hydrogen atoms, on the other hand, are related by rotation (a $C_{3v}$ rotation on the principal axis, so they can form one set of 3 hydrogen 1s orbitals.

Assigning symmetry labels to each set of valence atomic orbitals

The usual trick at this point is to simply read off the orbitals that have corresponding symmetry labels, e.g. the $p_x$ orbital would transform as $x$ on the character table. This definitely works for any atom that lies on the origin point of the point group, but it is not completely obvious where you would take the origin point for putting a (right handed) axis system on acetonitrile. The "middle" of this molecule would appear to be somewhere between the two carbons, and that may seem a little awkward.

Remember that in all cases, the choice of origin and axis system is actually arbitrary, however you should pick the most convenient one. Now, for acetonitrile you can pick any point on the principal rotation axis ($C_{3}$) and it would work, because that is an inherent feature of the $C_{3v}$ point group. If this is not obvious, I suggest looking at the answer I referenced previously, and also working through any other examples that you can find.

$s$ orbitals that lie on the principal axis

Now let's consider the $2s$ orbital or carbon atom 1. It should be fairly obvious that it transforms back to itself under all the operations of the point group (unchanged under identity $E$, any of the $C_3$ rotations, any of the $\sigma_v$ reflections), and so it transforms as $A_1$. It should also become very obvious that this is also true for the $2s$ orbitals of carbon atom 2 and nitrogen atom 3, even though these atoms are not symmetry-related, their atomic orbitals can have the same symmetry under the point group. This will be important when we come to construct molecular orbitals.

$p$ orbitals that lie on the principal axis

For p orbitals, we need to impose an axis system. Conventionally, the principal axis is taken as the $z$ direction. You have to follow these conventions when doing symmetry analysis.

Let's consider the $2p_z$ orbital or carbon atom 1, which lies along the principal axis. This again transforms as $A_1$.

The $2p_x$ and $2p_y$ orbitals are a little tricky. They remain identical under the identity operator $E$, giving a character of 2. For the reflection operator $\sigma_v$, one of the three $\sigma_v$ planes would keep one identical while inverting the other one (giving zero), and the other two $\sigma_v$ planes give characters of zero, so the overall character for $3 \sigma_v$ is zero. The $C_{3v}$ is the difficult one, where you have to put vectors on the axis, rotate them, work out the geometry with trigonometry, form the $2 \times 2 $ matrix and work out the trace (i.e. the character) is -1. Or you can use the fact that the character tables show (x,y) transform as the irreducible representation $E$.

Again, the same symmetry labels apply for all the atomic orbitals for all atoms that lie on the principal axis.

For these hydrogen $1s$ orbitals we examine explicitly how they behave under all operations of the point group.

This is a reducible representation. You need to reduce it to find the symmetry labels for the hydrogen $1s$ orbitals.

For the whole molecule of acetonitrile, the valence atomic orbitals give the irreducible representation $4 A_1 \oplus 4 E$. From the discussion above you should be able to deduce the exact symmetry label for any atomic orbital on any atom of the molecule.

Symmetry analysis cannot give you the energy of these molecular orbitals, however, so you cannot know how they are ordered relative to one another.

Not the answer you're looking for? Browse other questions tagged homework physical-chemistry symmetry or ask your own question.

15
How can I find the symmetry labels of atomic orbitals in a molecule?

15
How can I find the symmetry labels of atomic orbitals in a molecule?
9
Symmetry representations
6
Why does symmetry have to be maintained in molecular orbitals?
4
How derive g and u symmetry labels for orbitals?
5
What is difference between T1g and T2g?
1
Molecular electronic state symmetry