Where does the extra electron come from in the Lewis Dot Electron structure of say for example nitrate ion?

As most of you know, this is the diagram for nitrate ion: 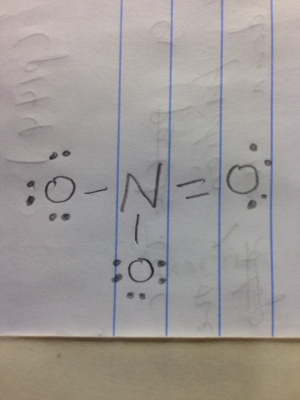 To draw this, i have to make all bonds with electrons from nitrogen, nitrogen only has five valence electron so ONE of the bonds consists of one electron from nitrogen and the other from the MYSTERIOUS electron, that comes out of no where.

My book tells me that's if simply how you draw Lewis diagram for N, O, F, Cl. When the oxidation is positive, take away electron and when it is negative, add.

In any covalent compound, bonding atoms share their electron to complete octet.( yeh, there are exceptions)

Unfortunately your Lewis structure for the nitrate ion, $\ce{NO3-}$, is wrong. You did not include any charges and as it is an ion there is at least one. Let's first have a look at how an ion may be formed and then hopefully you see, that there is no mystery at all about it.

The same happens when you dissolve potassium nitrate, which releases the nitrate ion: $$\ce{KNO3_{(s)} -> K+{}_{(aq)} + NO3- {}_{(aq)}}$$ Here you can see, that the nitrate ion has an extra electron which it has taken from the potassium. See ionic bonding for more information.

In the Lewis structure you have to distribute 24 electrons in a fashion, that you do not violate the rule of two, which is better known as the octet rule. Therefore your structure may include a nitrogen oxygen double bond, a positive formal charge on nitrogen and a negative formal charge at each of the singly bound oxygens.
Another representation is that all oxygens are singly bound and therefore the nitrogen has a $+2$ formal charge and each of the oxygens has a negative formal charge. The problem with this structure is that nitrogen does not have a full octet. Nevertheless, it is a strong contributor to the actual electronic structure. The bonding situation is much more complicated than can be expressed through a Lewis structure. The concept of resonance structures has to at least be included. Better in this case would be molecular orbital theory and or valence bond theory. The molecule itself is a y-aromatic system, the charge is delocalised through the extensive $\pi$ system. The blue structure is an attempt of showing this feature.

3
Proper Resonance Structures
24
Bonding in the phosphate ion
11
Does sulfur and phosphorus expand their octet?
6
How can Iodine bond with 5 Fluorines in Iodine Pentafluoride?
2
Covalent bonds other then 2-center, 2-electron bonds
1
Where does the energy required for excitation of electrons in hybridization come from?
4
How do molecules with muons and electrons bond?
1
Only valence shell electrons participate in bonding then how is Cr in H2CrO4 forming 6 covalent bonds although it has only 1 valence electron?