Do compounds of radioactive elements show a different behaviour? What happens when the radioactive part of the given compound decays? e.g. Radium chloride; what happens to it when radium decays?

I'd like to add to the other answers. Although not directly an answer to your question, I do feel it's relevant. Radioactive decay can cause damage to crystalline solids.

Take the example of apatite $\left(\ce{Ca5[PO4]3[F,Cl,OH]}\right)$, which can host a bit of uranium in the crystal structure. When this uranium decays, the resulting particle damages the host crystal. The crystal can then be polished and etched to reveal these so called "fission tracks": 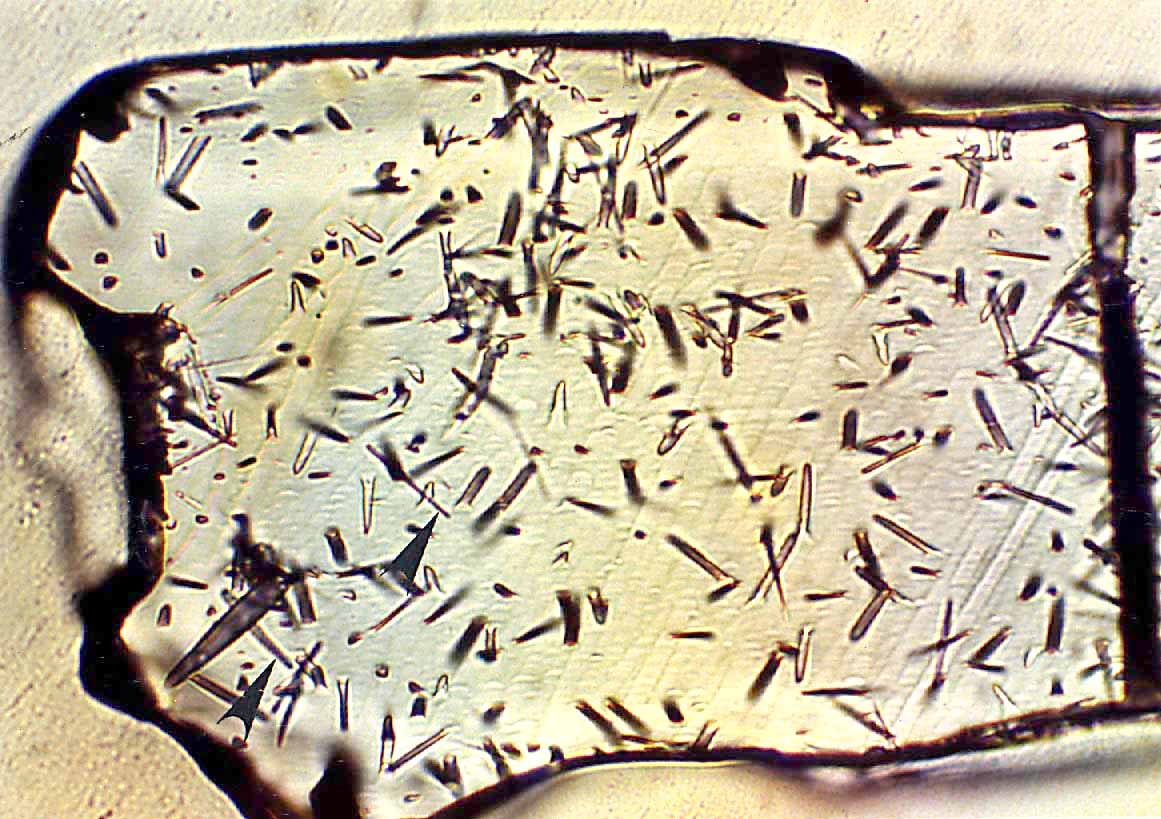 Heating of a damaged crystal will cause the damage to "heal" and the tracks to disappear. Thus, radioactive decay can indirectly induce chemical reactions. This routinely occurs in the deep Earth. It also has some very useful applications in geochronology, which you can read about in the Wikipedia article about fission tracks.

If the decaying atom would be a transition metal with ligands, it's properties should not change so drastically so that the ligands will stay attached.

I think we need to avoid concetrating too much on the atom at which the decay occured, it is true that many radioactive decays will cause bonds to break as a result of the recoil energy. But alpha, beta and gamma radiations coming from the radioactive atom can deposit energy in the solution, liquid, gas or solid where the radioactivity is present and thus cause chemical reactions to occur.

It is interesting that a solution of a radioactive chemical will undergo autoradiolysis which can change the chemical form of the radionuclide. For example if I was to start with a concentrated plutonium solution in the +6 oxidation state in an aqueous solution. Then if I was to seal it up then the radiation could cause the formation of other oxidation states of Pu, so I would soon end up with a mixture of Pu(III), Pu(IV), Pu(V) and Pu(VI). It is possible with additves to try to control the oxidation state of the plutonium (or other metal), so in some systems the chemistry can be tamed.

In addition to radioactive decay, which would, in the case of radium, give radon and an alpha particle (helium nucleus) that will strip 2 electrons from chloride ions or anything else nearby, the radioisotope will have a different mass from the stable isotope. This in turn may affect its reaction rate . The so-called isotope effect is largest in the case of hydrogen (tritium being the radioactive and three times heavier isotope, and it reacts slower in reactions involving the C-H bond.

0
Do radioisotopes emitted particles influence their chemistry?
29
Is there radioactivity at absolute zero?
-3
Radioactive decay of ions in solution

4
What is the product of alpha decay of curium-226?
3
kWh of radioactive elements database?
3
Radioactive Isotopes form Compounds? The Hershey-Chase Experiment
6
Why is Promethium the only radioactive Lanthanide?
48
What happens to a radioactive carbon dioxide molecule when its carbon-14 atom decays?
1
Why does cinnamaldehyde pass the ferric chloride test?
3
How does functionalized activated charcoal work?