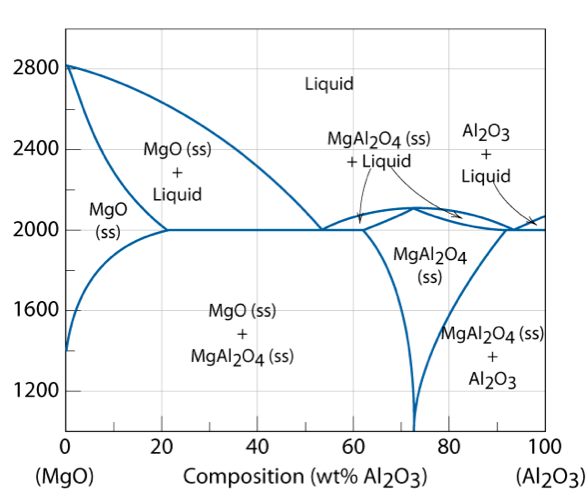 I've been told such regions exist because stuff are not miscible. However, does that mean the composition axis on the bottom is a lie? Namely, because it says ≠100% $\ce{MgO}$ and the region signals pure $\ce{MgO}$.

There is nothing weird in here. What you've been told is wrong, or maybe you have misunderstood it. Regions like this exist because stuff are miscible. (ss) stands for solid solution, meaning that the solid crystal structure can accommodate some amount of the other component (Al2O3 in this case).

The diagram is a bit misleading, because naming something as MgO(ss) is not entirely correct. Adding the (ss) implies that it is not pure MgO. A more correct way to name the fields in the diagram would be to rename MgO to "periclase" and MgAl2O4 to "spinel", which are the mineral names for these compounds. They will not imply pure compositions of the solids, and conceptually allow the solid solutions to occur.

Some applications of the lever rule: For example, take a look at 10% Al2O3 and 2000 degrees. You basically have periclase, which in pure form as the composition MgO. However, it has 10% of Al2O3 in it. It is still periclase though. Let's take a more complicated example: At 40% Al2O3 and 1800 degrees. You have two solid phases, periclase and spinel in roughly equal proportions. The periclase has 10% Al2O3 in it, and the spinel has 65% Al2O3 in it. Note that it's less than the ideal spinel should have!

Also, notice that Al2O3 in the diagram does not have (ss) in it. This means that it's always going to be Al2O3, with no MgO in it at all.

The curves that separate solid solution (ss) fields are appropriately called solvi (singular: solvus). They mark phase changes that are purely in the solid state, without any melting. For example, let's say you are at 70% Al2O3 and 2000 degrees. You have only one phase: a spinel. By cooling down the system, you will cross the solvus line and periclase will be added to the system, on the expense of spinel. You will be able to microscopically see it as patches or stripes or something like that of periclase in the spinel. Wikipedia has an image to demonstrate that (although it's built for eutectic compositions, the morphology is similar).

Not the answer you're looking for? Browse other questions tagged inorganic-chemistry thermodynamics phase or ask your own question.

11
How can the equilibrium shift, while Kc remains constant?
7
How to derive the pressure dependency for the Gibbs free energy?
25
Why is dU an exact differential and dq an inexact differential?
8
Open Database of Phase Diagrams?
20
Why does HCN boil at a higher temperature than NH3?
3
Why is the change in entropy is different for different interpretations?
1
Phase Diagrams and Equilibrium
20
Why do methane molecules have 15 degrees of freedom?
3
Vapor pressure vs. ambient pressure