The energetics of the mechanism of saponification were previously under debate, but I will admit, I misrepresented a point.

Here is the revised mechanism of saponification proposed by someone other than myself. It is the one on top.

The previously suggested mechanism is in the middle.

The textbook mechanism is the bottom one.

Now, it does seem that if the mechanism were concerted then proton abstraction would be much more plausible from a thermodynamic standpoint. If the second mechanism were akin to scaling Mt. Everest, then the first one looks to me to be more like climbing the rock wall at the gym.

We start with the same reactant - an ester - but in the second mechanism we are going through a dianion intermediate. In the first mechanism however we are simply going through a concerted transition state en route to the stable carboxylate.

So, again, I ask - which is (kinetically) correct? 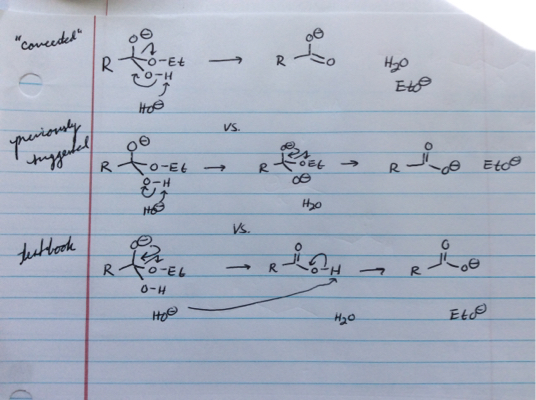 We know that acid-base reactions are fast. We also know that an anionic oxygen 'kicking out' an alkoxide is fast, at least relative to nucleophilic attack on a carbonyl (the rate determining step for any of these reactions AND the related trans-esterification is nucleophilic attack on a carbonyl to give the tetrahedral intermediate). What we're trying to answer is how fast is fast?

Here is my argument for the third mechanism. While acid-base reaction is fast, the top mechanism is essentially an E2 reaction, which does have a stereoelectronic preference for the hydrogen to be anti-periplanar to the leaving group. I have no doubt that conformation is readily accessible (the C-O bond will be rotating freely). The step is also bimolecular. In the third mechanism, an alkoxide kicking out a leaving group has no stereoelectronic preference. There are no alternate conformations to even consider. The C-O bond may be rotating, but it doesn't matter: there is always an electron pair arranged properly to kick out the alkoxide. Furthermore, the step is unimolecular.

The above is speculation, because I have never seen an alternative to the standard textbook saponification mechanism before. To be honest I never considered the concerted mechanism, and although I think it is a reasonable mechanism, I still prefer the textbook mechanism.

Not the answer you're looking for? Browse other questions tagged organic-chemistry reaction-mechanism saponification or ask your own question.

0
Concerted hydride and alkyl shifts
3
How can I have a concerted addition of bromines?
0
Gelatination of solution in saponification
12
Are nucleophilic aromatic substitutions stepwise or concerted?
2
RO- as leaving group in saponification process