Why is it that every snowflake is unique?

It's pretty hard to believe in around 4.5 billion years of this planet's existence, no snowflake pattern was repeated, and that's not including potential earth-like planets.

Is there a proof to the structure or is the probability even more statistically insignificant than I thought, or what?

It turns out that 2 identical snowflakes have been observed, but...

Although when we think "snowflake" we usually picture an object with 6-fold radial symmetry, snowflakes actually come in many different shapes (reference 1). Many sites report that in 1988 an NCAR researcher found 2 identical snowflakes of the hollow columnar variety (reference 2 - see "Uniqueness" section, reference 3). This pattern is much simpler than the 6-fold radial design, so the odds of finding 2 identical flakes are vastly improved.

If you wanted to confine the question to snowflakes of the 6-fold radial variety, then an argument can be made that 2 identical snowflakes will not be found. 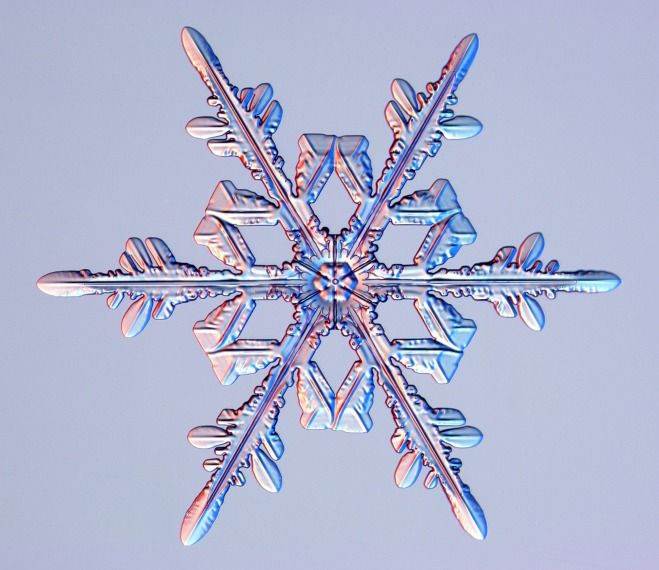 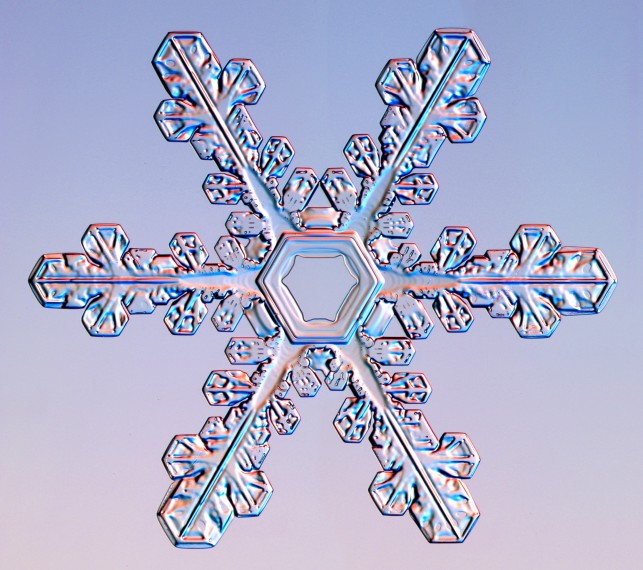 Due to the vapor pressure difference between ice and water, vapor is pushed from water towards the ice (hence, the ice grows) in an ice-water droplet falling through the atmosphere. As it falls through different temperature zones, the rate of ice crystal growth will change leading to different dendritic patterns along the radial arms. Further, due to perturbations caused by temperature and wind gradients across a single crystal, each radial arm will have a slightly different pattern.

The mathematical argument against identical (6-fold radial) snowflakes is, as Jon Custer suggested in his comment, based on factorial probabilities. The argument goes something like this. If you have 10 different pictures to put in an album you could arrange them in 10! (10 factorial) or 3,628,800 different ways. If you look at a snowflake under magnification, there are easily over a hundred different features that are identifiable. In this case there are over 100! or greater than $10^{158}$ possible arrangements of these identifiable features. Estimates are that there are around $10^{80}$ atoms in the universe. Each visible feature in a snowflake contains a large number of water molecules and an even larger number of atoms. Hence, the number of possible arrangements is far, far greater than the number of available atoms, making it extremely improbable that a duplicate of a complex snowflake would be created.

If you're still not convinced, we can add another level of probabilistic protection. Remember that there are isotopes of hydrogen and oxygen. The probability of finding two 6-fold radial snowflakes with the same dendritic pattern and the same isotopic substitution pattern is even closer to zero.

7
Does symmetry lower the energy of molecules?
13
Why are snowflakes shaped as they are?

7
Is it possible to save an insoluble snowflake?
4
What's the reddish powder that oozes out of a black rock?
2
Is there a substance that would react with seawater to produce a dense, insoluble, nonporous precipitate?
1
Why is quickly cooling a a hot pan bad for it?
3
How dried up detergent water led to precipitation of snowflake like shapes?
10
How thick is a snowflake?
4
Simple every-day-item hydrometer for distinguishing regular soda and diet sodas
8
Why does zircon hate lead? How do these tiny crystals so effectively exclude lead atoms during formation enabling accurate uranium-lead (U-Pb) dating?