Everyone is familiar with the very common, hexagonal ice. Bit there are many other forms of ice - what do they look like? If you had big blocks of ice in all the different known phases next to a block of hexagonal ice, what obvious differences would you notice?

As you know, ice can exist in at least 15 or so solid phases. Of these, the first phase, $Ice$ $I$ (ice-one) is the only phase found naturally on earth, mostly in the form of $Ice$ $I_h$ hexagonal crystal as seen in glaciers and snowflakes.

The visible appearance of ice (eg: transparency and clarity) depend also upon the level of purity of the crystals formed. For example, air can get trapped within inclusions of the ice, making it translucent or opaque white, as shown in the image below. 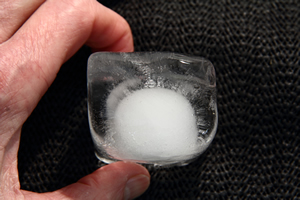 The cubic form $Ice$ $I_c$ is metastable so is rarely found, generally in high clouds in the upper atmosphere, where it is formed at ambient pressure by the condensation of water vapour at very low temperatures (-80°C).

Most other forms of crystalline ice (designated as $Ice$ $II$ to $XV$ are metastable, being produced in the laboratory by the application of high pressures (above 200MPa) and/or low temperatures (below 72K), resulting of denser packing of the water molecules. 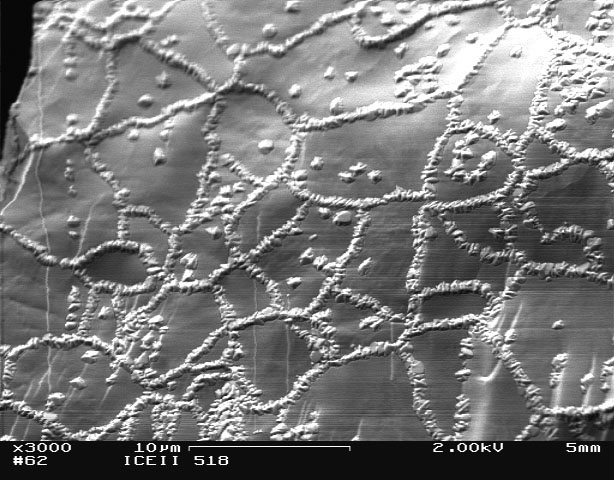 The SEM image above is of $Ice$ $I$ decorated grain boundaries in fine-grained $Ice$ $II$. The $Ice$ $I$ stands in raised relief relative to the $Ice$ $II$ due to volumetric expansion to the lower-density phase.

Scientists believe this form of ice can be found on the interior of some large icy moons orbiting Jupiter.

The macroscopic appearance of the 'exotic' forms of ice depends upon many variables such as crystal grain size. The laboratory production of these 'novel' forms of ice to ensure proper formation of fine crytallite grains (less than 10 microns) is time consuming, requiring careful control of temperature and cycling of very high pressures.

For example, $Ice$ $IV$ is formed by heating high-density amorphous ice at a slow (0.4K/min) rate from 145K and at a constant pressure of 0.81GPa. It forms a rhombohedral crystal (see image (a) below). 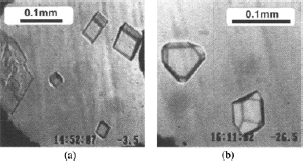 Similarly, $Ice$ $V$ is formed from liquid water at 500MPa by lowering its temperature to 253K. It has a more complex lattice structure and forms monoclinic crystals (see image (b) above).

"Square snow" or $Ice$ $VI$ is formed from liquid water by compressing it at 1.1GPa (10,850atm) and lowering its temperature to 270K. Its unit cell forms tetragonal crystals with all water molecules hydrogen bonded to four others, resulting in the formation of dendritic crystals (approx 45 microns across, see image below).

For more images from the laboratory, see: http://web.mit.edu/wbdurham/www1/short%20htmls/more%20ice%20photos.html

Visual observations of crystal morphologies and melting of Ice IV at pressures up to 1GPa, Chou and Haselton, Review of High Pressure Science Technology Vol 7 (1998).

5
Nomenclature for different types of ice
14
What is the smell of a glass of water in contact with fresh air?
3
What do the molecular orbitals of a single water molecule look like?
31
What makes ice slippery?
52
What is the pH of ice?
17
Using table salt as a way to limit humidity in an unoccupied house
2
Are there any cold temperature reactions in liquid where ice forms as a precipitate?