Why is bipolar resonating structure less stable than monopolar structure?

In my book, it is written:

But what's the reason?? What is going on?? Please help me with a math-free explanation. 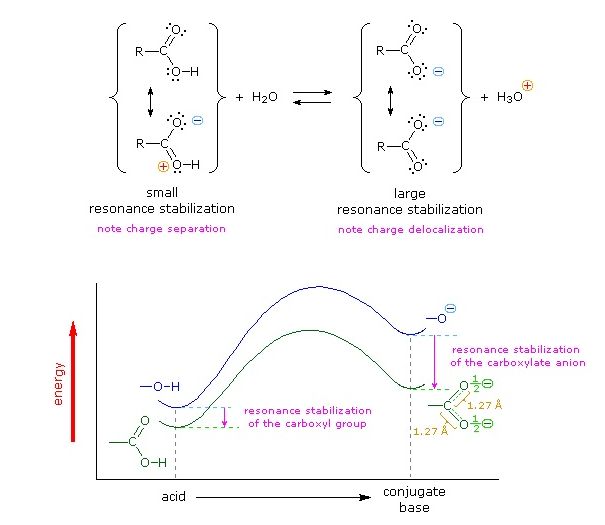 The diagram above illustrates the scenario. While it is true that the resonance stabilization is greater for the deprotonated form, the protonated form is still overall more stable. The book is inaccurate in that regard.

The "resonance stabilization" refers to electrons being donated into empty orbitals within the molecule. In this case, there is a lone pair in the hydroxide oxygen atom being donated into the antibonding pi orbital of the C = O. A way to rationalize the effect is that, when the proton is attached to the oxygen, you have both the H and the O pulling on the electrons. When the H is removed the electrons will more readily flow into the C = O pi*. Since both O atoms are equivalent, you end up forming an orbital that looks like an extended pi bond.

24
Why is acetic acid more acidic than phenol?
12
Why does delocalization of π electrons bring stability?
21
Which carbons in pyrrole have the highest electron density?
0
Why is aniline less basic than methylamine?
4
Stability of canonical forms
4
Is an antiaromatic compound more stable than a non-aromatic compound because of more conjugation?