Is the Nitrogen in pyridine electron withdrawing and what effect does this have on electrophilic substitution?

If I were to attempt to nitrate Pyridine (essentially benzene but with one carbon replaced with Nitrogen) would I get substitution at the Ortho-, Meta- or para position? Also why is this? I can only think of an inductive effect that the Nitrogen might have but I can't think of more factors and I also can't think whether it will be directing towards o-,m- or p- nor why. Can you help?

The orbitals in pyridine are pictured below; 6 pi electrons in a loop of 6 continuous p-orbitals (like benzene) plus a lone pair of electrons in an $\ce{sp^2}$ orbital on nitrogen in the plane of the ring. 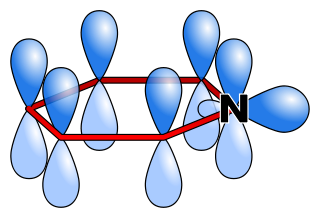 This removal of electron density from the ring by both inductive and resonance effects suggests that pyridine will undergo electrophilic substitution much more slowly than benzene (the ring is said to be deactivated).

we see that in each case we can draw 3 resonance structures, but only in the meta-attack case do we keep the positive charge on carbon and not on the more electronegative nitrogen. Therefor, meta-substitution is preferred in electrophilic attack on pyridine 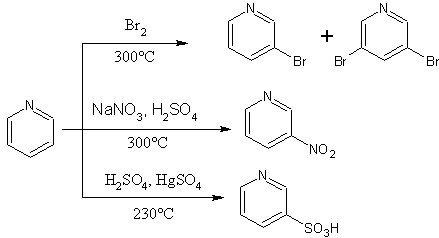 So electrophilic attack on pyridine will produce meta-substituted pyridines. Note too that in the case of nitration, the first thing that will happen is that the lone pair on nitrogen will be protonated by the strong acid and generate the pyridinium cation. The ring in the pyridinium cation is even more deactivated than the pyridine ring because of the full unit of positive charge on the nitrogen; but again if you look at the possible resonance structures, meta-attack will be preferred. In this case the ring is so deactivated that extremely vigorous conditions must be used to nitrate the ring.