What do short-range and long-range corrections mean in DFT methods?

Currently I am looking for the most accurate calculation method for a simple non-conjugate molecule consist of C, N, O and H. Normally I would try each method for a similar and known molecule then compare them with the experimental results but I don't have anything to compare this time.

So I need to predict a method for ground state and excited state calculations. While I was searching I kept coming across the terms "long-range" and "short-range". In the original publication of CAM-B3LYP for example, the authors claim that CAM-B3LYP provides additional long-range corrections, the weak part of B3LYP. What does it suppose to mean to me? I was unable to find any definitions of these terms.

Any additional tips about choosing a method are appreciated, also.

There are many good review articles, but I really like the freely available "The ABC of DFT" by Kieron Burke (and friends) and a recent review article that tries to keep to understandable language.

The problem is treating the Coulomb interactions. Conventional DFT is not "asymptotically correct." That is, at long range, the 1/r behavior is not met, and dispersion interactions (e.g., van der Waals forces) are not properly handled either.

For example, in Neon atom (from ABC of DFT by Burke): 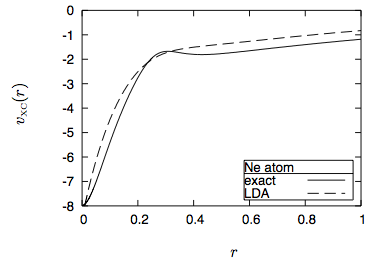 The problem of course is that most DFT methods start from the local density approximation (LDA) which only considers the electron density at a particular (local) point. LDA indicates that the long-range behavior falls off exponentially instead of 1/r:

So some recent efforts have used "range separated" functionals, e.g.,

The first (short-range) term can be handled by the generalized gradient approximation (GGA) used by basically all modern functionals. The second term is usually handled by Hartree-Fock (i.e., exact exchange), and there's some function g(r) which smoothly scales between the two.

I think modern range-separated hybrid functionals are quite good, but choosing a functional depends a bit on the property that you want to predict. Thermodynamics? Excitation energies? Oxidation/reduction potentials from orbital eigenvalues? etc.

Geoff basically answers your question. As the tip about choosing a method: if you are looking for an accuracy beyond 1 kcal/mol, then you should consider wave-function based quantum chemistry methods, e.g. coupled-cluster methods. CCSD(T) method would be very appropriate for ground state calculations, while you can use EOM-CCSD methods for the excited state calculations. However, these methods have a much worse scaling compared to DFT, so depending on the size of your molecule and the computational sources you have, these methods might be out of reach. You may want to check this review on coupled-cluster methods.

Not the answer you're looking for? Browse other questions tagged quantum-chemistry computational-chemistry density-functional-theory or ask your own question.

28
Suggest methods and basis sets for a variety of systems
11
Defining and testing custom made DFT functionals?
6
A thorough benchmark of DFT functionals without dispersion corrections
19
Do modern dispersion-corrected DFT methods give more accurate molecular geometries?
4
Why are there so many DFT Methods?
9
How to calculate the amount charge transfer from a natural population analysis?
6
What are computed energies in DFT and FF methods relative to?