So I understand than the lanthanide contraction is due to poor shielding of the 4f electrons which decreases the radius. However, if Im not mistaken the relativistic effects lead to a contraction of the core orbitals (s,p) while the f and d orbitals expand. So what I do not understand how do they match, one of them decreases the radius and the other one should expand it as the f orbitals expand right? They usually say relativistic effects are one of the reasons for the lanthanide contraction Thanks

quantum-chemistry rare-earth-elements relativistic
Share
Improve this question
edited May 15 '15 at 15:41

The lanthanide contraction is caused by two effects

This Wikipedia article presents a nice discussion of the lanthanide contraction. The article estimates that the first effect, the screening effect, is the major factor, with relativistic effects playing only a minor role (~10%) in the observed contraction.

what I do not understand how do they match, one of them decreases the radius and the other one should expand it as the f orbitals expand right?

That's correct, the outer s- and p-orbitals contract due to the lanthanide effect, while d- and f-orbitals expand (see this SE Chem post for a more detailed description). In the lanthanide series, the 6s electrons are further from the nucleus than the 4f electrons, therefore they (the 6s electrons) determine the radius. A contraction of the 6s orbital radius results in a contraction of the observed lanthanide electron radius, even though the 4f electrons have moved slightly further away from the nucleus.

Only orbitals with l=0 (s orbitals) have radial components that are non-zero at the nucleus: 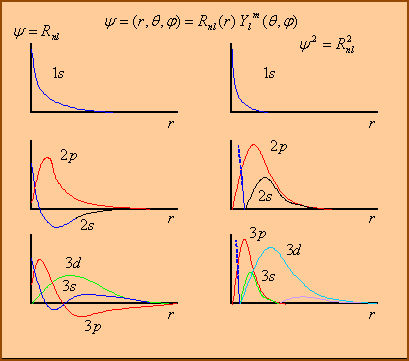 Not the answer you're looking for? Browse other questions tagged quantum-chemistry rare-earth-elements relativistic or ask your own question.

240
Why is gold golden?
4
Why does the "gap" between atomic radii get smaller down the periodic table?

8
Ab initio effective potentials
11
If d-electrons are such poor shielders, why do trends increase more gradually across the d-block than the s or p-block?
3
What are the physical manifestations of radial nodes?
14
After a unitary transformation, is Koopmans' theorem still valid?
19
What causes the "Gd break" in the trend of lanthanide-EDTA formation constants?
12
Molecular orbitals used with CCSD(T) geometries
1
How can ionic bonding in lanthanides occur without valence orbitals available for overlap?
1
Why does the Most Stable State of an Atom Tend to be One with Full s and p Subshells?
1
Why are s orbitals more “penetrating” than p orbitals?