I am supposed to rationalise the regioselectivity of bromination of 8-chloroimidazo[1,2-a]pyrazine, as depicted in the scheme.

The left ring kind of looks like a pyridazine. If it's anything like a pyridine it'll be bad at electrophilic substitution without activation, so bromination at C–5 or C–6 is out. I guess it has to be one of the carbons in the five-membered ring. But why is it C–3 and not C–2? I am trying to draw out resonance structures and reason that way.

You are on the right track. Pyridine and similar nitrogen analogs of benzene are deactivated with respect to the electrophilic aromatic substitution reaction. You are also right that a resonance structure can help explain the regioselectivity of the reaction on the five-membered ring.

On the other hand, electophilic attack at the observed site gives an intermediate 3 that maintains aromaticity in the six-membered ring and complete octets in all atoms. 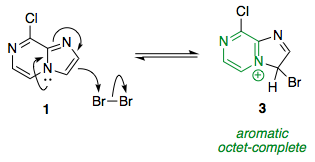 We can predict that the intermediate arising from attack of the electrophile at C–3 would be more stable than the corresponding C–2 substitution intermediate. Since this step should be endothermic, the rate of this step will be influenced by the stability of the resulting intermediate (Hammond's postulate). From there, we can proceed through the usual addition/elimination mechanistic sequence to get to the product.