Is there a way to contain fluorine gas for long term so that it can be visually observed?

Bromine, chlorine and iodine can all be sealed in a glass container for display without the elements reacting with the glass.

But if you try to seal fluorine in glass I believe it will react and fog the surface making it harder to see the gas, right?

What's the best way, if at all possible for long term containment of fluorine for display?

As @JonCuster mentions, some materials are pretty resistant to fluorine gas at room temperature.

But out of curiosity, I checked Theodore Gray's website. He's made an effort to have a "periodic table" table with actual elements. He also has a beautiful book, called (naturally) The Elements.

Almost anything placed in the path of a stream of fluorine gas will spontaneously burst into flame. This includes things like, oh, say glass, steel, and other things not normally thought of as flammable. It is, therefore, fairly difficult to have a sample of it in an element collection. I used to have a statement here that there was no transparent container that could hold fluorine for any length of time, but I was corrected by a man who has figured out how to do it.

There's more here but I'll summarize. Basically, the problem with glass is the $\ce{Si-O-H}$ bonds, which will auto-catalytically react with $\ce{F2}$ to give $\ce{HF}$, and that etches the glass. So with a high quality quartz tube, a lot of annealing, and a fluorocarbon grease to coat the glass and minimize reactivity, it works.

Interestingly, I always had the idea that fluorine gas was a light blue-green. Instead, it's brownish.

How to get the gas inside, then make a glass seal, is a bit of a challenge though. Surfaces can be optically polished ultra-flat, mated, and locally melted. Ultrasonic friction melting perhaps, or flame or IR. This is an expensive but viable option and would need some development.

According to the Periodic Table of Videos Fluorine Gas found in nature (NEWS) in 2012 existence of naturally occurring fluorine was found in "fetid fluorite" a form of fluorite where natural radioactivity has caused free fluorine to form and migrate within the crystal. The remaining Calcium has already fully reacted with fluorine and is therefore protected from attack. 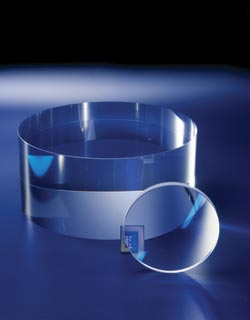 above: Photonics.com back in 2003: In Search of Calcium Fluoride: Manufacturers face new production challenges as they attempt to meet rising need. 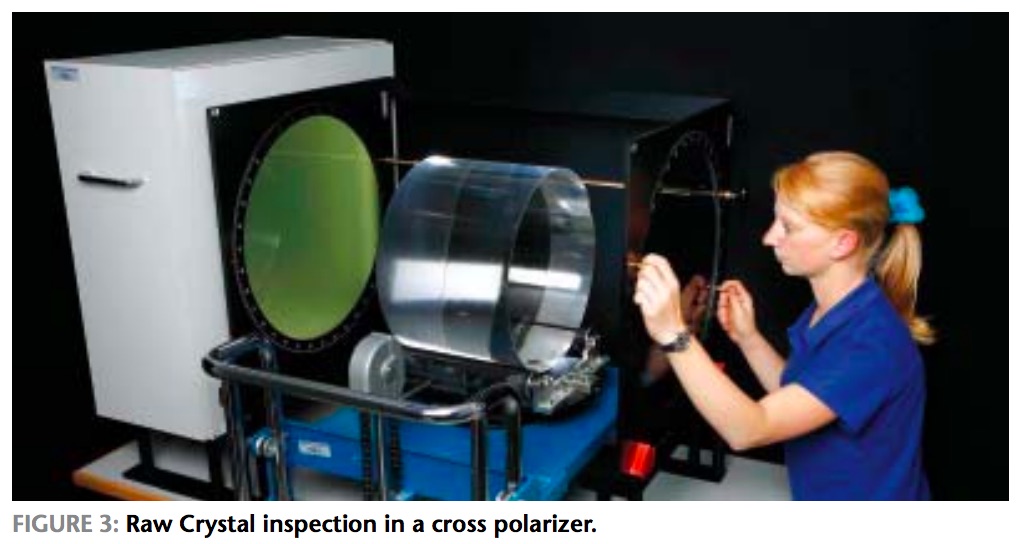 above: From optik-photonic.de Calcium Fluoride Crystals Blanks Offer Highest Transmission Rates at 193 nm and Below

Many sources for polycrystalline calcium fluoride or "$\ce{CaF2}$ glass" exist. Corning is one example, and it is possible that magnesium fluoride would work as well:

Florian Kraus of the TU Munich, as well as Jörn Schmedt auf der Günne and Martin Mangstl at the Ludwig Maximilians University in Munich have now obtained direct proof: Elemental fluorine is the guilty party that causes the unpleasant odor. By using 19F nuclear magnetic resonance spectroscopy (NMR spectroscopy), they were able to show for the first time that elemental fluorine is contained in “antozonite”.

How is this possible for such a reactive gas? The researchers explain that “antozonite” contains a tiny amount of uranium that, together with its radioactive daughter nuclides, constantly releases radiation into the surrounding mineral. This causes fluorite to split into calcium and elemental fluorine, forming the calcium clusters that give “antozonite” its dark purple color. The fluorine is contained in tiny enclaves surrounded by nonreactive fluorite, which shields it from the calcium, allowing it to maintain its elemental form.

Not the answer you're looking for? Browse other questions tagged safety reactivity elements containers or ask your own question.

3
How is fluorine gas contained and transported, why aren't the metal cylinder and tube in this video attacked?

9
Options for long term storage of helium?
13
Are there any good examples of commonly ingested molecules that contain particular toxic individual elements?
4
Are there stronger oxidizing agents than fluorine gas?
5
Storage of the Halogens in PTFE Bottles
1
Is there a blanket term for all variants (both nuclides and ions) of a chemical element?
6
Is there a quantitative test/analysis technique that can determine if some chloroform has degraded into phosgene?