Boundary lines in phase diagrams and the lever rule

My first question is: What exactly happens on a point situated on a line? Or on a point such as E in this figure? 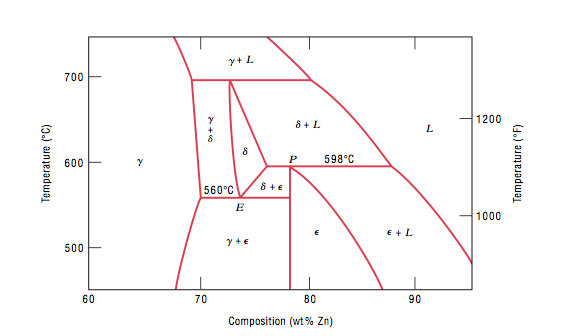 My second question is: How can I apply the tie line and lever rules on a point on a point situated on top of a line, if I want to find Liquid percentage Solid Percentage, and maybe concentrations of one component in the liquid phase and solid phase? Is it undefined on top of the line? 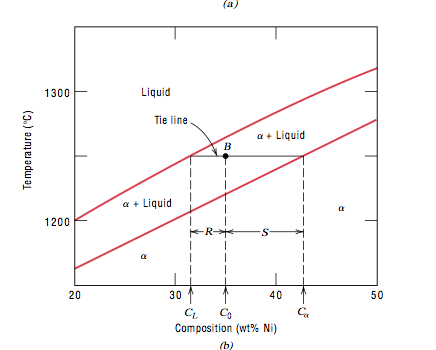 Also, regarding the nature of the lever rule, is it some sort of empirical rule without any real theoretical foundation? At first glance, I can't believe it's actually accurate. Why is it true?

Thanks and sorry if my questions are unclear...

Lots of questions wrapped in one, but they do all come down to understanding what is represented on a phase diagram. Up front, I'll suggest Porter and Easterling's classic text on 'Phase Transformation in Metals and Alloys' - it has lots of good info for lovers of thermodynamics and phase transitions.

In a system like Cu-Zn that you have pictured above, there are a number of different phases observed. You could imagine that at a given temperature you could construct a free energy curve for each phase as a function of composition. At each composition, only one will have the lowest free energy, and one might think you could identify the phase diagram that way. However, a straight line across the G vs. composition plot is special - it represents where the chemical potentials of both elements are constant. So a line that is tangent to two free energy curves represents a range of compositions where the elements in the two phases have the same chemical potential. This then is how you construct the phase diagram - find the minimum free energy across composition, then find the common tangents (if any). An example is shown here: 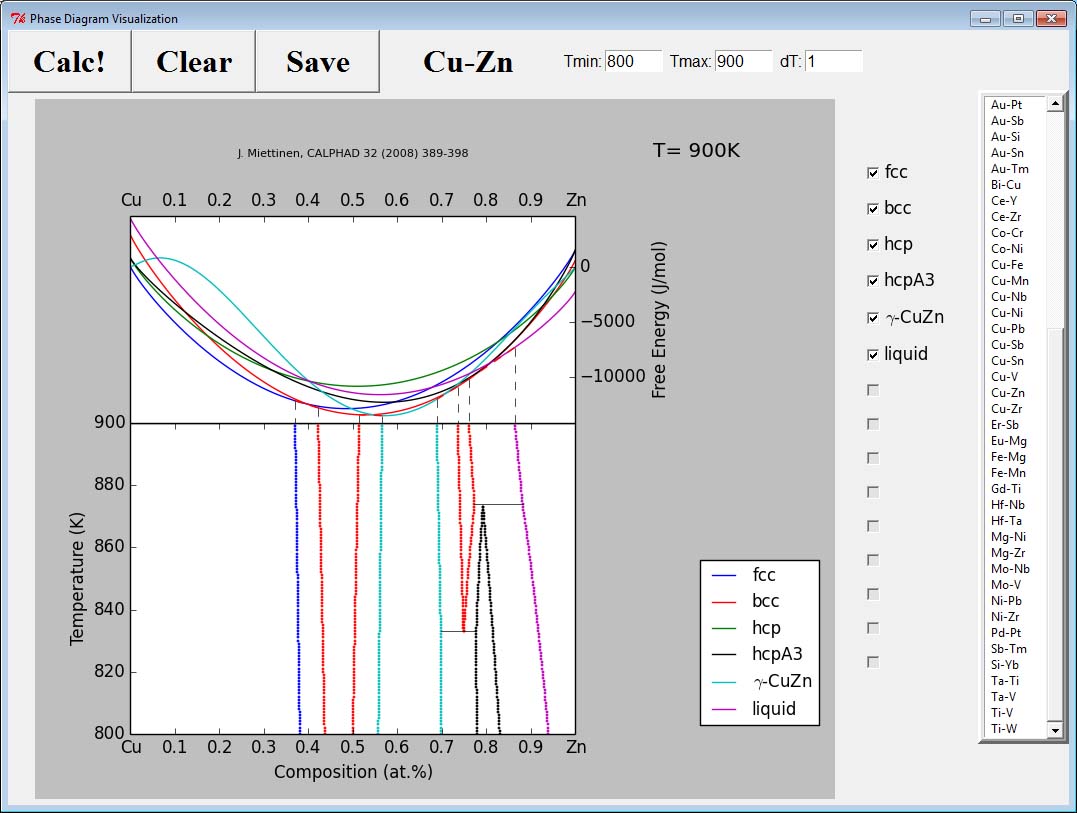 Now the $\delta$, $\gamma$, $\epsilon$ are specific phases. In regions with just one of them listed, that is the only phase stable at the temperature and concentration. Regions such as $\delta + \gamma$ are regions where both are stable. There relative amount has to follow the lever rule, which is just a linear variation across the two-phase region from, say, all $\gamma$ right on the boundary of $\gamma$ with $\gamma + \delta$, to all $\delta$ on the other side.

The horizontal lines are there mostly to emphasize when a new phase appears or disappears. So, at point E on you diagram above, there is one specific temperature and composition at which $\delta$, $\gamma$, and $\epsilon$ are in equilibrium. Go up in temperature, and it wants to be all $\delta$; come down in temperature and you enter the two-phase $\gamma$-$\delta$ region with the relative abundance from the lever rule. At P, the horizontal line is to point out that $\epsilon$ disappears into the $\delta$-liquid region.

So, at the eutectoid E, there is one point where the three phases coexist (Gibbs phase rule). Moving away from that point moves into single or two-phase regions. Everywhere along the horizontal line through E is $\gamma$+$\epsilon$, except at exactly point E.

4
How are phase transition diagrams calculated?
2
Why will A atoms diffuse from β phase to α phase and B atoms from α phase to β phase?

3
Eutectic Phase Diagram and Lever Rule
7
How to find and use the Clausius-Clapeyron equation
13
How many particles are necessary to observe a well-defined state of matter?
1
Phase Diagrams and Equilibrium
13
Why does ordinary water have a triple point?
4
How is a phase equilibrium defined for a one-component system?
4
What does the phase diagram mean by “liquid” at NTP? (The liquid and vapor coexist even when the situation is not on the curve)