How to interpret a luminescence intensity vs wavelength graph? 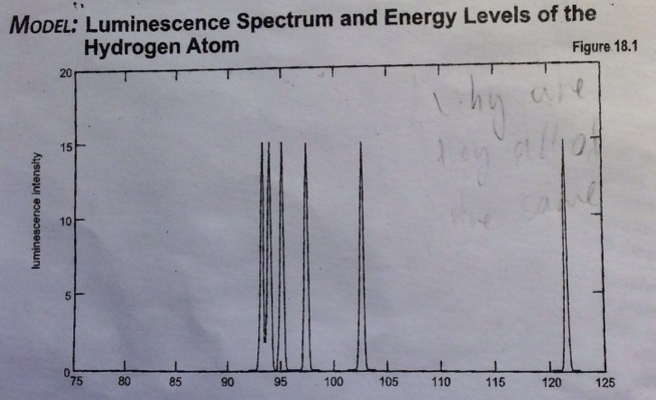 Luminescence is defined as the amount of light emitted by a atom. But what confounds me of this graph is the fact that all the peaks are of the same height. In addition, there are no peaks in between two peaks. why are the peaks of the same height? Andwhy are there only six peaks, if photons can be emitted having the wave length of say, 110nm?

I am sure those are ultraviolet rays.

This is a partial spectrum of the luminescence from a hydrogen atom, the graph presents only the Lyman series of emissions. 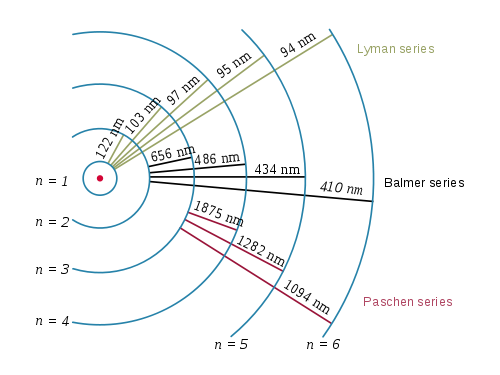 For the hydrogen atom, the wavelength of these various emmissions is given by the Rydberg formula

for the Lyman series this equation becomes

and six lines can be seen in the ultraviolet. After the 5th line (n=6 -> n=1), all other transitions are so closely spaced that they appear as one line (the sixth line).

5
What is the Series Limit in a Spectral line

1
How will these hydrogen atoms interact?
5
Wavelength of X-rays
2
How are atoms manipulated?
4
Base Peak Intensity different than higher value in Mass Intensity Map
0
Determination of initial excited state via luminescence
3
What are the physical manifestations of radial nodes?
0
Hydrogen molecule potential energy graph