Bromination of 1,3,5-cyclooctatriene followed by nucleophilic substitution by excess dimethylamine

Write the mechanism for the following reaction (bromination of 1,3,5-cyclooctatriene followed by nucleophilic substitution by excess dimethylamine):

My answer so far: 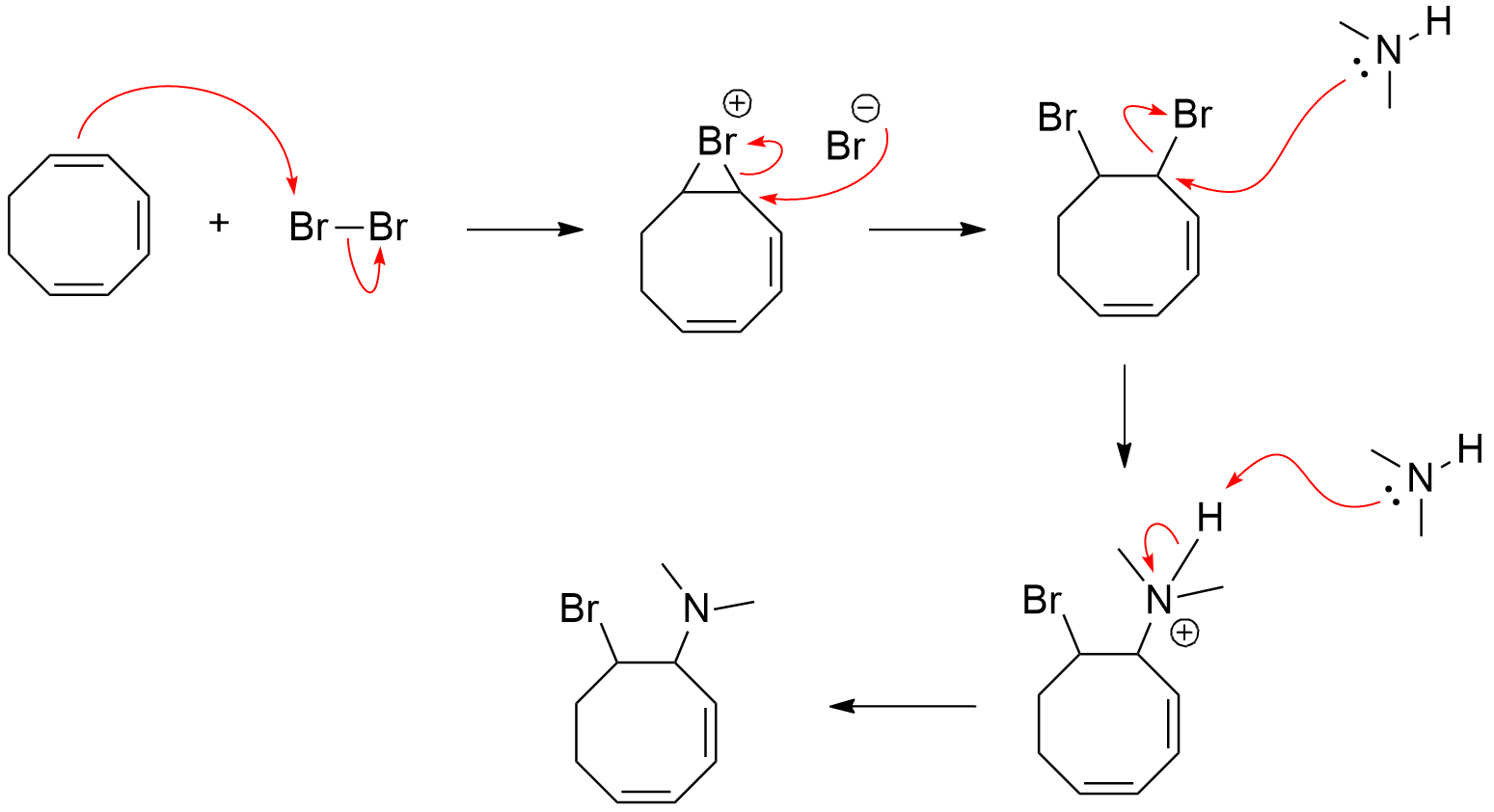 I have only shown one of the reactions, I presume it is the same for adding the other $\ce{Me2NH}$ on the other side.

How do I get rid of the second bromine, or does just one of the Br's add? If it is only one, why, because you usually use $\ce{HBr}$ for that?

This is a quote from Solomons and Frylhe Organic Chemistry 10th Ed, Chapter 13, p.614

Reactions of this type are quite general with other conjugated dienes. Conjugated trienes often show 1,6-addition. An example is the 1,6-addition of bromine to cycloocta-1,3,5-triene.

A plausible mechanism for the bromination step would be the initial formation of a bromonium ion which is attacked distally by bromide:

Sequential nucleophilic substitution with dimethylamine then leads to the desired product.

Echoing Martin's comment on Siddharth Porwal's answer, there is a distillation step between the bromination and the substitution with dimethylamine. It is not possible for a putative bromonium ion to survive. Also, the isolation of the 1,6-dibromide also disproves the possibility of 1,2-addition mentioned in RE60K's answer.

The reaction above was originally reported by Cope et al.:[1]

Bromine (3 g) in 20 ml of chloroform was added to a stirred solution of 2 g of 1,3,5-cyclooctatriene in 20 ml of chloroform at −15 to −25° in a nitrogen atmosphere in a period of one hour. The product was distilled rapidly under reduced pressure; b.p. 95° (0.3 mm), n25ᴅ 1.5954. [...] Previous work had shown that dibromocyclooctadiene prepared by the two routes gave the same bis-dimethylaminocyclooctadiene by reaction with dimethylamine.

Either the molecule, undergoed 1,6 bromine addition or 1,2 addition, in which the first case easily gives the product and in case of second, the final addition can be 1,6. It was 1,6 addition in the first or second step is hard to say, as I'm concerned.

Don't be confused if the final structure is looking as if it had no rotation, it had michael addition.

10
Naproxene syntheses: electrophilic aromatic substitution on activated naphthalene
6
Bromination of a benzene based molecule
2
Major Product of Alkene in Bromine Water
18
Ipso substitution and its rules
13
Rearrangement with sodium iodide (ring opening)
0
Why does the reaction between 2‐methylbut‐3‐en‐2‐ol and hydrogen bromide show allylic shift?