Elastic scattering of x rays in 3D: the principle for XRD analysis

I have some trouble visualising scattering of x-rays in 3D, since all textbooks and examples present it in 2D. Under I will share some reflections (no pun intended) about the elastic scattering of x rays, and the diffraction effects observed, which is the basis of XRD analysis. 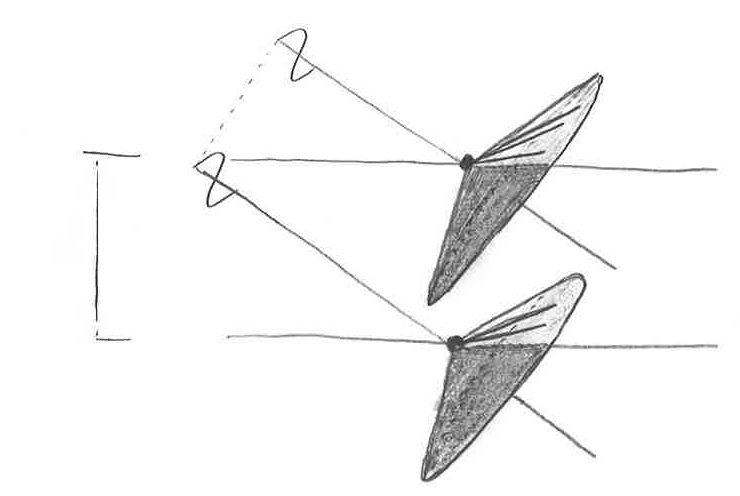 Here you see a figure of two crystal planes, separated by the distance d. Two parallel and in-phase x-rays hit an atom in the planes. The scattering cones are drawn. The darker area represents those scattering directions going into the crystal itself, and thus not detectable and uninteresting for XRD analysis. The light area are those scattered rays exiting the crystal.

Though we get constructive interference in all directions of 45 degrees scattering angle, the scattering angle itself is random. This means there are scattered rays which do not undergo constructive interference in all directions, regardless of angle (though smaller angles are more probable). So, in an ocean of random scattering, we have diffraction cones of much greater intensity, since Bragg's law is fulfilled.

Is this a correct assessment of the XRD situation?

In 3D you will see spots not cones from a single crystal. If you Google for "XRD spot pattern" images, you will probably find yourself enlightened about how many different shapes, and forms diffraction patterns can take.

Debye-Scherrer rings are one special case which occurs when you have a diffraction pattern from a very fine powder. In such a powder you are summing the diffraction patterns from thousands to millions of individual crystallites. In this case, you can imagine a large number of spot patterns rotated randomly around the beam axis so each spot projects into a cone. Each individual crystallite, however will produce a spot pattern, and there is never anything but a spot pattern from a single crystallite. (Sometimes spots can be smeared when there is strain in the crystal, or when the crystal is too small to produce high quality diffraction, but these are really cases of imperfect crystals.)

You can see diffractions from rays transmitted through the crystal. However, X-rays tend to be absorbed within a few microns to millimeters in most materials so that limits the size of crystal you can use for transmission X-ray diffraction.

Finally, I noticed you said "Two parallel and in-phase x-rays..." I just want to note that diffraction occurs with a single photon. A single photon can scatter, and produce constructive/destructive interference with ITSELF. You need to do this with many photons to see a full interference pattern, however, and this is usually the case in experimental situations. If this is new to you, then take a look at Young's double slit experiment.

Hopefully this clarifies things a bit.

6
Is there any emerged master principle in chemistry, like the theory of evolution in biology?
3
Molecular orbitals and "generalized" aufbau principle for heteronuclear molecular configurations
7
Applying the Le Chatelier principle
1
Does the probability of fluorescence increase when energy of incident X-rays match the electron's binding energy?
3
Is there open source software for SEM EDX data analysis?
18
Protons and the Heisenberg principle
0
What is the origin of the Quadratic factor in calculation of XRD peaks?
3
Mathematical justification for Le Chatelier's principle
5
What is the precision of intensity data in XRD measurement?