When one studies the acidity of chlorophenols, one notices the following:

First of all, chlorophenols are more acidic than phenol, due the negative inductive effect (−I) of chlorine, that reduces the negative charge, located on the oxygen of the phenolate anion.

Among the different chlorophenols, the observed trend is explained by the fact that the stabilizing −I effect of chlorine decreases with the distance from oxygen.

Now focusing on another class of substituted phenols, such as methylphenols (= cresols), the $\mathrm pK_\mathrm a$ varies as follows:

In this case, the methyl group yields a positive inductive effect (+I), thus increasing the negative charge on phenolate oxygen. That's why cresols are less acidic than phenol. One can further realize that the meta compound is more acidic, and this is due to the resonance structures which show a negative charge in ortho and para, but not in meta.

I would appreciate to learn whether such a reasoning, for these two type of substituted phenols, is plausible or whether further more solid arguments should be invoked.

In particular, I would appreciate to understand why the difference in acidity between 2- and 4-chlorophenols is much more pronounced than the same difference between o- and p-cresols.

I would appreciate learning whether such reasoning, for these two type of substituted phenols is plausible or whether furthermore solid arguments should be invoked.

Your reasoning seems generally well thought out. You clearly have a good understanding of inductive effects and you mention resonance effects in the cresol series. Structural effects don't play a role with these compounds, but let me mention them for completeness. If we have a compound such as I with a carbonyl ortho to the hydroxyl substituent, then in addition to inductive (stabilizes the anion) and resonance (stabilizes the anion) effects, we should also consider hydrogen bonding; which, in this case, would stabilize the phenol making it less acidic. On the other hand, in compound 2, the bulky t-butyl group would force the ester carbonyl to twist out of the plane of the benzene ring. In II, the inductive effect of the carbonyl would still operate, but the resonance and hydrogen bonding effects on acidity would be diminished. 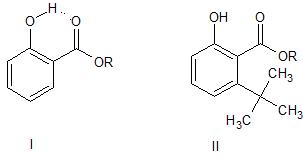 This link discusses electrophilic aromatic substitution, where again both inductive and resonance effects need to be considered. About two-thirds of the way down the page we see that chlorobenzene undergoes electrophilic nitration about 30 times slower than benzene, but is still ortho-para directing. We also see that toluene reacts about 25 times faster than benzene and is also ortho-para directing. From these and other examples, we learn that chlorine donates electrons weakly by resonance and withdraws electrons strongly through its inductive effect; and that a methyl group is a mild electron donor through resonance (hyperconjugation), while its inductive effect is also electron-donating, but is small.

Let's apply these concepts from electrophilic aromatic substitution to your two phenol series. In the chlorophenols, we would expect the chloro substituent to influence the series primarily through a strong electron-withdrawing inductive effect. Indeed, as the chlorine moves closer to the hydroxyl substituent, the inductive electron withdrawal increases in power and the $\mathrm pK_\mathrm a$ increases dramatically. On the other hand, in the methyl series we expect mild resonance (hyperconjugation) effects to dominate (even though the inductive effect is in the same direction), therefore in the ortho- and para-cresols we expect the anion to be weakly destabilized and consequently a bit less acidic than phenol itself; while the meta isomer, with minimal resonance and inductive effects affecting the anion, should have an acidity close to phenol.

Not the answer you're looking for? Browse other questions tagged organic-chemistry acid-base quantum-chemistry resonance phenols or ask your own question.

25
Why is acetic acid more acidic than phenol?
22
Comparing acidities of substituted and aromatic carboxylic acids
10
Inductive vs resonance effects and the acidity of phenol
5
Electron withdrawing groups and acidity
19
Acidity order of nitrophenols
0
Arranging the phenol derivative in decreasing order of acidity
6
Relative acidity of p-chlorobenzoic acid and p-flurobenzoic acid
13
Acidity order of 4-halophenols