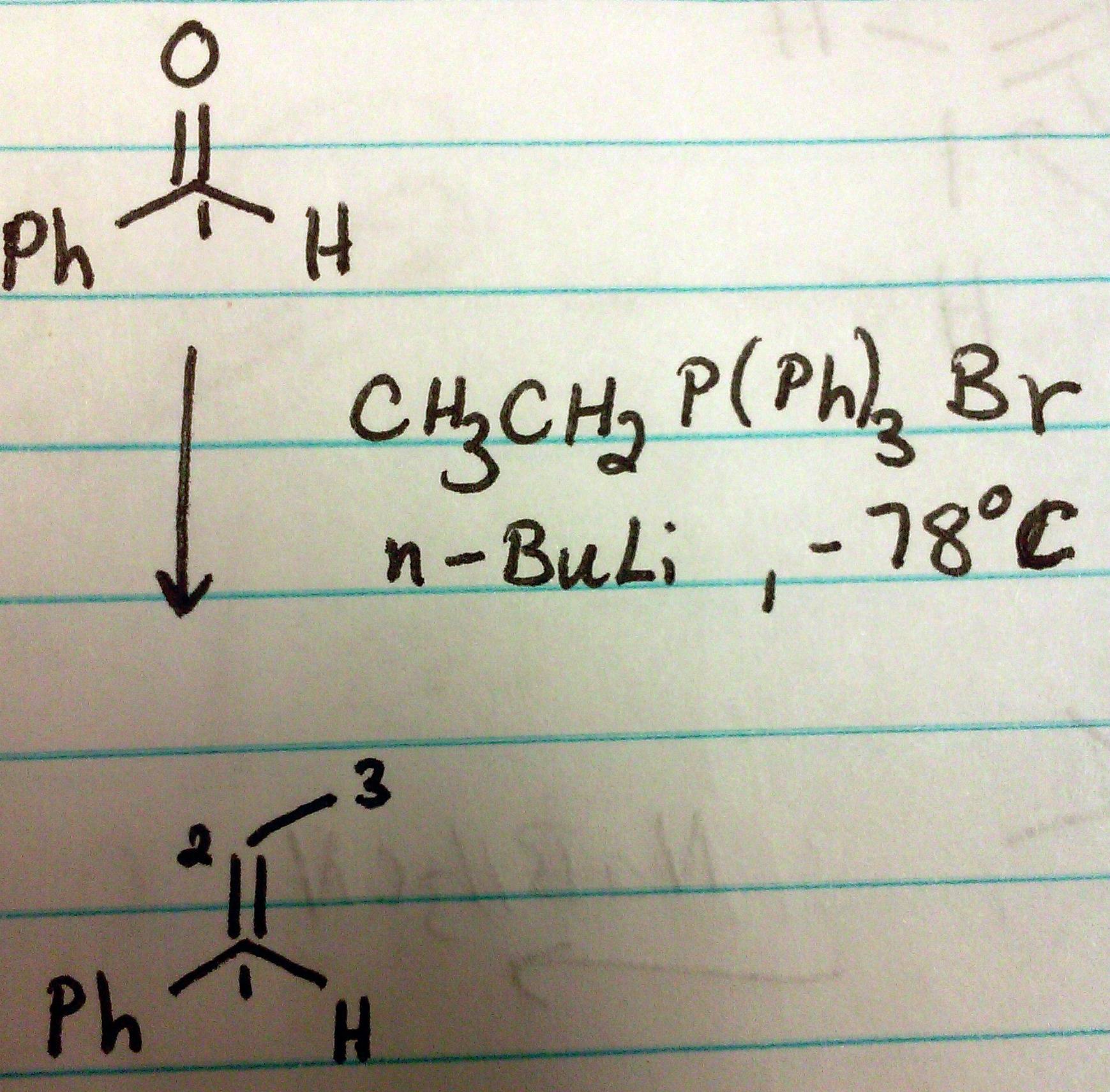 As far as I can see this is a Wittig reaction resulting in a two carbon increase with removal of the oxygen.

The only thing that strikes me as odd is that the Wittig is conjugated to a bromide salt. The only way this can happen is if the phosphorous part has an overall positive formal charge. Does this mean that the n-butyllithium will abstract a proton and leave the carbon backbone of the Wittig as $\ce{CH3CH}$?

Even so this doesn't seem to affect my final product ...

Below is the preparation of the Wittig reagent you are given. Yes, the intermediate is a phosphonium salt, with a formal positive charge on phosphorus. Treatment with base (BuLi) deprotonates at the adjacent carbon giving a phosphorus ylide.

As for the Wittig reaction itself, one postulated mechanism (depicted in Organic Chemistry by Maitland Jones) is shown below. Nucleophilic attack of the ylide onto the aldehyde gives an open betaine intermediate, which closes to form an oxaphosphatane. The strained 4-membered ring decomposes readily to give an alkene and triphenylphosphine oxide.

The stereochemistry of the Wittig is related to the nature of the ylide used. Unstabilized ylides, such as the one here, predominantly give the Z-configured alkene, while stabilized ylides (usually through conjugation to a carbonyl) give an E-configured alkene as the major product. With substrates similar to the ones here, I obtained a 4:1 ratio of Z:E products, so the selectivity is not perfect, as K_P points out.

The stereochemical outcome is intimately related to the mechanism, and according to my copy of Jerry March's Advanced Organic Chemistry (4th ed), there is no evidence for the betaine intermediate. Instead, the oxaphosphatane is formed directly through a [2+2] cycloaddition mechanism. This mechanism is attractive because the stereochemical demands of the cycloaddition account for the preference of the (less stable) Z-product. However, this does not explain why different ylides give different selectivities.

I suspect they want you to specify the stereochemistry too. The expected product should be the cis (predominantly at least). That's the textbook answer, reality is not that ideal.

EDIT: If I remember correctly the Z- isomer is favoured in higher temperatures and in lower temperatures you will get worse selectivity, or even predominantly trans. In any case your answer is not "wrong" maybe incomplete.

2
Restricted synthesis; formation of nucleophile and electrophile from one carbon source
5
Why does capping after each coupling in Solid phase peptide synthesis improve the results?
2
About how much carbon monoxide is produced in these two different reations?
3
Rearrangement of an oxyallyl cation
1
Wittig reaction with an alkyl dibromide
1
Does an acetal need to have one hydrogen attached to its carbon?
3
Why do dihaloalkanes lose both halogen atoms during mass spectrometry?