I'm trying to create a reasonable reaction mechanism for the reaction of nitrosobenzene and N-hydroxyaniline, which happens as part of the reduction of nitrobenzene to azobenzene using magnesium as reductor and methanol as solvent. Ron was very helpful to give me a general outline of this entire mechanism:

The key step is formation of nitrosobenzene (this is just a reasonable proposal). 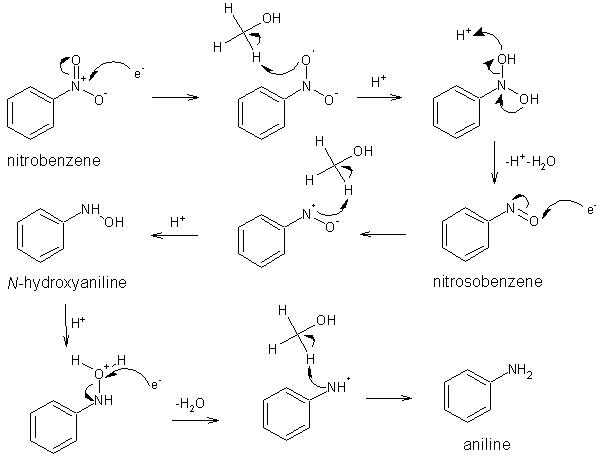 Some of the nitrosobenzene can be further reduced to aniline and N-phenylhydroxylamine, both of which are nucleophiles and can react with the nitroso N=O bond (analogous to a carbonyl). Elimination of water in both reactions produces azobenzene and azoxybenzene respectively. The azoxybenzene can be further reduced to azobenzene. 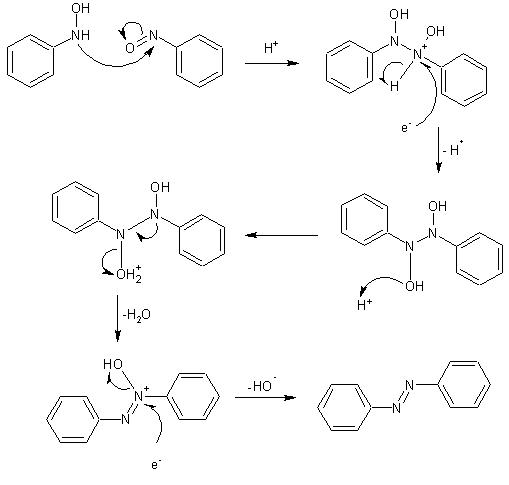 I wonder whether this is a correct reasonable reaction mechanism. I tried to move radicals as much as possible from positively charged/highly electronegative atoms (e.g. the nitrogen in the nitro functional group / oxygen) to the less electronegative atoms (e.g. carbon). My reasoning was as follows (I have not yet learned about in radical chemistry, but I give it a try): radicals can be removed in two ways: 1) the radical electron leaves the molecule, which results in a positive charge. This is less likely to happen with a more electronegative atom like oxygen in comparison to for example carbon, so that the radical is more stable on oxygen. 2) The radical reacts with an other molecule and obtains an extra electron forming a new covalent bond (in this case the electron is donated by methanols C-H bond), resulting in a neutral molecule with no radicals. Since oxygen is more electronegative than carbon it is more "greedy" to fill the singly occupied orbital, making the radical more stable on carbon. Furthermore the second way to lose the radical is much more likely than the first, since it leaves a neutral molecule instead of a charged one.

At last, I was told that reactions involving metal surfaces (like magnesium in this case) are often not well understood. Why is that? Because there are too many pathways?

Below is my proposed mechanism. You'll see that we go through some of the same key intermediates, so I think you are on the right track. In your second step, it is much more likely that the proton is removed by acid base reaction instead of through the electron transfer process you've shown. Since the initial intermediate (my second structure) is zwitterionic, we can just say that it will neutralize itself. If the reaction conditions are not acidic (from what I see, it's just methanol and magnesium), then there will not be an appreciable amount of the protonated hydroxylamine. The mechanism doesn't require it, as nitrogen is strong enough to "kick out" hydroxide. The result is essentially an azoxybenzene, so we just need to figure out how to lose the other hydroxyl. As the cationic form, it will want to accept electrons, such as from the magnesium as a free electron. Back to a neutral (radical) compound, the other hydroxyl can be kicked out, giving a radical cation on nitrogen. Filling in a second electron from magnesium results in the azobenzene product.

3
What causes hydrogen abstraction in the radical chain mechanism of alkane halogenation?
4
Terminology for "proton stripping"?
3
Peroxide in acidic conditions being reacted with iron sulphate mechanism
0
Generalizations regarding functional groups on benzene ring
2
How does conversion of a free radical to a carbonyl compound take place? Unsure about mechanism