Number of diastereomer pairs of 1,3-dichloro-1,2,3-triphenylpropane

How can I determine the number of possible pairs of diastereomers here?

My first guess was two: RR with RS and SS with RS. But what about the potential chirality center middle carbon? There are two identical branches attached to it; however, those two branches can change R/S. So, is it a chirality center?

I basically agree with Ron's answer, but had to draw all of the possible structures to confirm it. The complication is that carbon-2 is non-stereogenic but it may be chirotopic depending on the configuration of the neighboring atoms. The IUPAC Gold Book calls this a pseudo-asymmetric carbon atom. Carbon-2 is not a stereocenter, because it does not have four different "things" attached to it. However, its configuration is important relative to carbons-1 and -3. Below are all of the possible combinations.

Out of the eight possibilities, we see there are only four unique compounds (names generated in ChemDraw):

The small r and s are essentially used to indicate the stereochemistry at carbon-2 relative to carbons-1 and -3. Note that in compounds B and F, the stereochemistry at carbon-2 is inconsequential as in both cases the phenyl group is syn to one chloride and anti to another chloride. I haven't been able to find an adequate explanation of assigning the r/s designations, but I believe that the R configured substituent receives higher priority than the S configured substituent, and Cahn–Ingold–Prelog system is followed from there.

Let's number the 3 aliphatic carbons to make our discussion clearer. 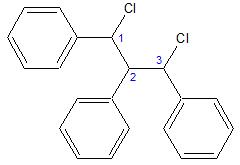 If we assign R- and S- configurations to carbons 1 and 3 respectively, then there are 4 different groups attached to carbon 2, but the difference in 2 of the groups is just "R" or "S". In fact, in this situation there is actually a plane of symmetry bisecting the molecule and the molecule is achiral - it is a meso-isomer. The plane of symmetry contains carbon 2 and the hydrogen and phenyl group attached to carbon 2, and, as expected, the R- and S-substituents are enantiomeric. In such cases it is correct to say that carbon 2 is pseudo-asymmetric (thanks to @GaurangTandon for pointing this out!). The Cahn–Ingold–Prelog priority rules can still be used to describe carbon 2, the R substituent is given priority over the S substituent and lowercase "r" and "s" are used to describe carbon 2, the pseudo-asymmetric carbon.

In the case where we assign R- and R- (or S- and S-) configurations to carbons 1 and 3 respectively, then there is no longer a plane of symmetry bisecting the molecule. Carbon 2 is now prochiral (this means changing one substituent is all that is required to make carbon 2 chiral), but the molecule as a whole is now chiral.

Going in the order carbon 1-2-3 here are the various possibilities:

So there are 3 diastereomers; one is chiral and exists as a d,l pair and the two other diastereomers are achiral, meso-compounds.

I don't think it is hindered enough to prevent rotation around the central carbon, so I think it only has two stereogenic centres, leading to four possible stereocentre combinations as you have identified: RR, SS, SR, RS

This results in more than two pairs of diastereomers though:

2
How to determine the configuration of C atom bounded to two groups with same configuration?
23
What does lowercase r-s notation mean?
16
IUPAC name for 1,2,3-trichlorocyclopropane?
4
Number of stereoisomers and symmetry of pentane-2,3,4-triol
5
Pseudochirality with more than two groups on one carbon atom
4
Cis and trans substituents on rings different stereodescriptors
2
Stereocenter or not?

1
R,S Configuration
4
How to find the number of stereoisomers of a tetra-substituted allenes, exhibiting both axial and central chirality?
4
Cis and trans substituents on rings different stereodescriptors
13
Difference between Epimers and Diastereomers
2
Alkene Electrophilic Addition Reaction Stereoselectivity When Two New Asymmetric Centers Form
2
What is the number of stereoisomers for hex-4-en-2-ol?
2
How can a compound having a plane of symmetry be Chiral?
7
Does 1,4-dimethylcyclohexane have a chiral center?