Can someone explain this to me by drawing resonance structures for the cyclopropylmethyl carbocation please?

Also one more question, is the tricyclopropylmethyl carbocation more stable than tropylium ion? 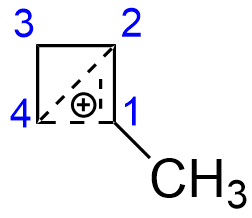 Here bonding of $\ce{C-4}$ with $\ce{C-1}$ and $\ce{C-2}$ can be roughly described as an interaction of the vacant $\mathrm{p}$-orbital of $\ce{C-4}$ with filled orbital of $\pi$-bond between $\ce{C-1}$ and $\ce{C-2}$. It does not matter much, where the original leaving group was - at $\ce{C-2}$ or $\ce{C-1}$. Since the positive charge is more or less symmetrically distributed between three atoms and the small ring is somewhat relieved of its geometrical strain (both cyclopropane and cyclobutane are very strained molecules, not only due to angle strain, but also considerable steric interactions between hydrogens), the cation has remarkable stability.

Similar effects are common in the chemistry of small bicyclic systems, with norbornane derivitives being the chosen test subjects for decades with the 2-norbornyl cation being probably the most well-known example. March's Advanced Organic Chemistry, 7th ed., Section 10.C.i discusses such nonclassical carbocations in great detail, with the cyclopropylmethyl system being described on pp 404–406.

With further addition of multiple cyclopropyl groups, however, the full conjugation becomes sterically hindered, so extra groups beyond the first have less of an effect. Of course, the stability of these cations is far below that of the tropylium cation, which has very little strain and also possesses aromatic character, distributing the positive charge over seven(!) carbon atoms. In fact, the stability of the tropylium system is so high, that even the cyclooctatrienyl cation (also known as the homotropylium cation) adopts a similar structure.

For a cyclopropane C atom, the four hybrid orbitals are not equivalent. The two orbitals directed to the outside bonds have more $\ce{s}$- character than a normal $\ce{sp^3}$ orbital, while the involved in ring bonding have less, because the more $\ce{p}$ like they are, the more they resemble the ordinary $\ce{p}$ orbitals whose ordinary bond angle is $90^\circ$. Since the angle strain is a measure of the difference between the preferred angle and the real angle of $60^\circ$, this additional $\ce{p}$ character relieves the strain. The external bonds have $\sim 33\%$ $\ce{s}$ character, so they are $\sim \ce{sp^2}$ orbitals, while the internal orbitals have $\sim 17\% \ce{~s}$ character so they are $\sim \ce{sp^5}$ orbitals. Thus, each C-C bond is formed by $\ce{sp^5-sp^5}$ overlap.

The bonds in cyclopropane are called bent bonds and they are intermediate in character between $\sigma$ and $\pi$.

Now, coming to the stability of cyclopropyl methyl carbocation, it is symmetrically stabilized by both $\ce{C-C \sigma}$ (2-3 and 2-4) bonds. You may call it bent bond resonance with the vacant $\ce{p}$ orbital of the carbocation.

It is worth mentioning that cyclopropyl group stabilizes an adjacent postive charge even better than a phenyl group.

0
Stability of tertiary carbocation
9
Can a organic compounds such as hydrocarbons contain an ionic bond?
26
Stability Comparison between the Tropylium and Tricyclopropylcarbinyl Carbocation
7
Carbocation rearrangement involving three membered rings
19
Why are two three-membered rings preferred to a single five-membered ring in the reaction of a dihalide with alcoholic KOH?
9
What is the reason for the exceptional stability of tricyclopropyl-cyclopropenyl carbocation?
9
Why does this ring contraction take place in the following nucleophilic substitution?
8
What is "dancing resonance"?
6
Mechanism for the conversion of an unsaturated alkyl halide to an alcohol
6
Semipinacol-type rearrangement leading to ring expansion
See more linked questions