Why is proton coupling through bonds and how does this affect identical protons?

I had the opportunity to work with a NMR spectrometer and decided to learn some of the theory behind it. After finishing Clayden's chapter on $^{1}\textrm{H}$ NMR (Ch. 11) I'm still left with some questions, mostly concerning coupling.

Proton coupling is described as the interaction between neighboring (2-4 bonds away) protons magnetic field. This can split the signals by a constant amount (the coupling constant), which depend on the environment of the protons but not on the strength of the magnetic field. Ideally creating a binomial distribution when the neighboring protons have the same shift.

How does a proton create a magnetic field that influences the neighboring protons (mainly) through bonding and not through space?

Why do identical protons not influence each other?

For a more-rigorous explanation see: http://www.chemie.uni-hamburg.de/nmr/insensitive/tutorial/en.lproj/energy_levels.html

How does a proton create a magnetic field that influences the neighboring protons (mainly) trough bonding and not trough space?

A proton doesn't interact with another proton by producing a magnetic field per se, but it interacts via the bonding electrons via the Fermi contact interaction. And because the Wikipedia article is kind of dry on this matter, here a figure that very well illustrates what is going on: 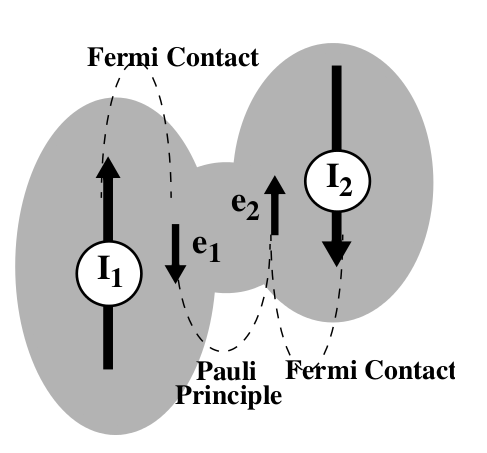 Why do identical protons not influence each other? Or more general: why is it that how more identical the influencing protons are with the influenced proton (i.e. $\Delta\delta$ getting equal to/lower than $J$), the more their "outer" signals vanish? Especially since $J$ is a constant, I would expect that for example two doublets would just merge into one doublet and not into only a singlet.

Also here, a picture is worth more than a thousand words (I'll spare you the calculation of this spectrum): 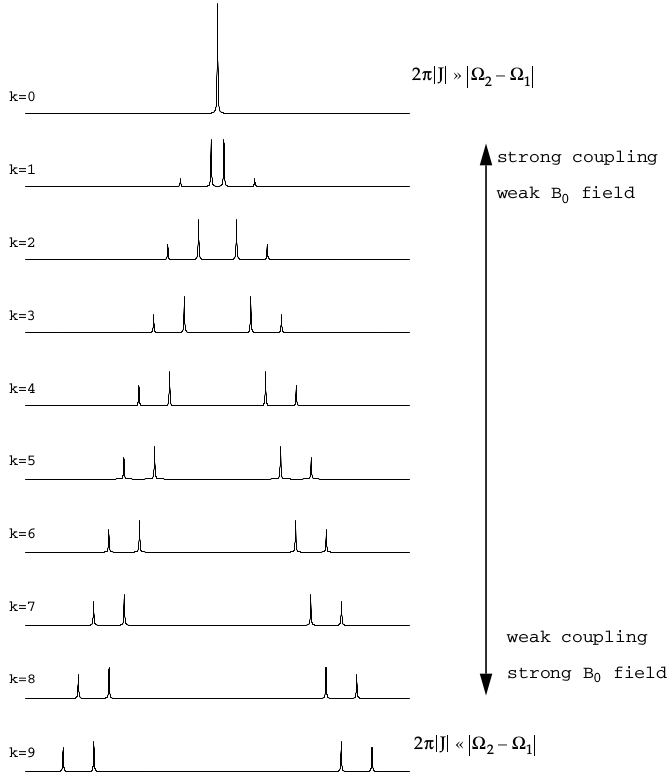 As you can clearly see, the outer peaks start getting smaller the smaller the difference in chemical shift ($\Omega$) of the two spins tends towards zero. This is sometimes called "roof effect".

1
Proton NMR signals and rings
3
Spin spin coupling in a proton NMR of an ester?
7
NMR Splitting for Adjacent, Equivalent Hydrogens?
13
Comparison of COSY and TOCSY for detection of small couplings between protons
5
Proton NMR Spectrum for Nicotinic Acid
13
Qualitative explanation of how COSY works
15
Where does magnetic inequivalence come from?
3
NMR sweeping magnetic field