Buffer Power of the amphiprotic substance

The mass balance for a generic amphiprotic substance $[\ce{AH^-}]$ this:

where: C = initial concentration of the amphitrofic substance

The Eq.1 derivative is:

The curve that represents the buffer power, plotting the Eq.3, is: 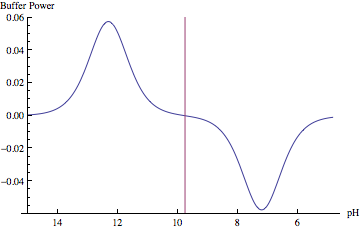 In this way I can say that at maximum concentration of the amphiprotic substance the buffer power is zero. Is this statement true?

As the curve that represents the buffer capacity does not simply rely on one fraction of the whole system but on all species of the acid-base system it is not enough to only consider the derivative of $c(\ce{HA-})$.

You also have to take care of the other deprotonated species in your system. For the case of a diprotic acid this means that $c(\ce{A^2-})$ is also important albeit not much as you can see in the following figure. 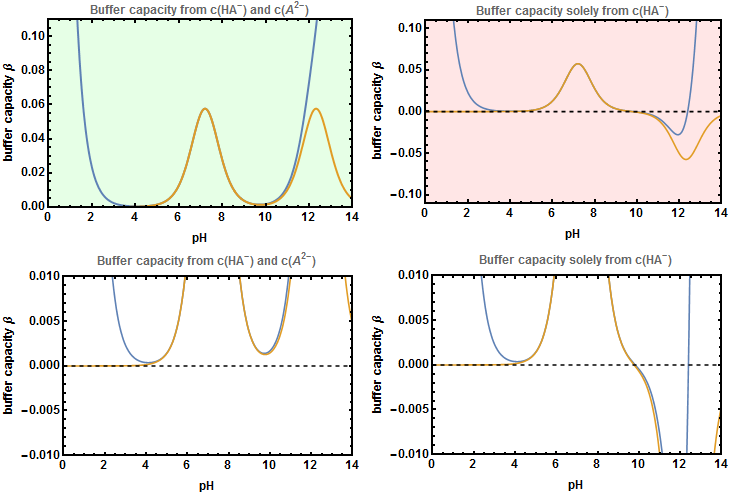 Figure 1: Buffer capacities for a diprotic acid with different amounts of assumptions taken into account – denoted by their plot labels. The lower graphs are zoomed versions of the upper graphs.

So ... is it correct to say that at maximum concentration of the amphiprotic substance the buffer capacity is zero? No but for your to acidic constants it's nearly zero.

Let's look at those systems a little bit closer. Imagine a few systems and their corresponding buffer capacity curves with $pK_{a1}=4$ and $pK_{a2}$ values between 4 and 10 like in the following figure. 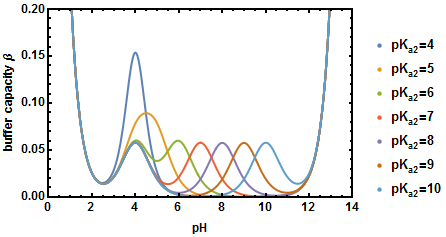 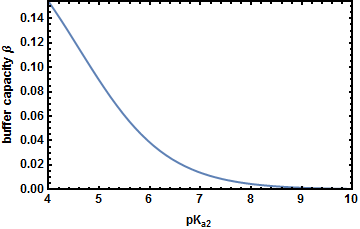 2
Max Ionization Extent
0
find the pH where is maximum the concentration of a amphiprotic substance
3
Can Henderson-Hasselbalch equation be used to determine the pH of a solution when a strong base and a strong salt of that base stay together?
1
Why is maximum buffer capacity for some diprotic buffers not when pH = pKa?