Are there any reactions with no activation energies?

Are there any reactions with no activation energies? Our professor just told us there are no chemical cliffs. Is this true?

I read something about nuclear decay as being a reaction with no activation energies. Why is this so, and how does this work?

Now one might naively assume that there's no activation barrier in a simple electron transfer, but that's not true. Since the geometry of $\ce{A+}$ and $\ce{A}$ as well as $\ce{B}$ and $\ce{B+}$ are not identical, there is a reorganization energy of both the molecular species and the solvent or environment. This reorganization energy ($\lambda$) serves as an activation barrier for the charge transfer.

Now the convenient thing about charge transfer reactions is that you can tune the $\Delta G$ of the reactants.

Marcus predicted that the maximum rate would occur when the $\Delta G^0 = -\lambda$ and thus the $\Delta G^\ddagger = 0$. If the reaction becomes more thermodynamically favorable, you enter the inverted region and the activation barrier goes up and the reaction rate goes down.

This is a long-winded answer to say there are some chemical reactions with no activation barrier, in addition to the other cases here. Usually the key phrase describing these in papers is "barrier-less reactions"

Many reactions, such as simple acid-base reactions are diffusion controlled. This means that reaction occurs at every encounter, and that this is not an activated process. Another example involves benzene. Say we generated the molecule 1,3,5-cyclohexatriene, it would immediately isomerize to benzene (unequal bond lengths, localized pi electrons -> equal bond lengths, delocalized pi electrons). If we put this on a reaction coordinate it might look something like this, 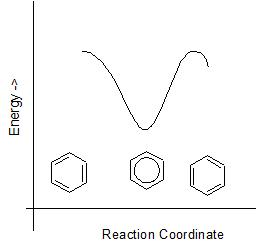 I've always thought of this as a process with a negative activation energy, but maybe zero would be a more accurate description (can you have a negative barrier?). I suspect it applies to many reactions where there is a large thermodynamic difference in stability between product and reactant favoring product and where there is minimal structural reorganization.

The issue with some of the proposed reactions of the above posts is activation energy, if its measured in Gibbs free energy, should also subject to entropy, since ΔG=ΔH-TΔS. However the wikipedia article on activation energy (as of this writing) suggests when reaction rates decrease with activation energy, because the molecules were prepared to react at room temperature. The only way for the activation energy equation to work would be through would be for negative activation energy. Reactions like this are simple: i.e. two things smash together and will combine if the potential energy is larger than their momentum. But say for instance you heat this reaction up. You've accelerated these particles (that is, heated them, since heat can be considered kinetic energy) the reactants are so fast and have so much momentum they simply bounce off each other, and so the becomes meaningless. As an aside, you can have 'cheating' occur in normal reactions with hydrogen which exhibits quantum tunneling (because its so tiny). So you can have product form from a reaction while the reactants are way below the activation energy expected. So a smartass rejoinder to your professor's comment would be "sure, cliffs may not exist, but slippery slopes sure do!"

The reaction between two ions to form a molecule has no activation energy as they are attracted to each other and therefore no force, and no energy is required to bring them together. e.g $\ce{H+ + H- -> H2}$

I seem to remember (haven't got the reference on hand) that singlet methylene (|CH2) inserts into the C-H bond with zero activation enthalpy. It's certainly an enormously reactive and high-energy species.

I read something about nuclear decay as being a reaction with no activation energies. Why is this so, and how does this work?

You're asking too much. I can answer you in short:

Nuclear Decay Reactions occur when the nuclear force$^1$ between nucleons is not able to hold the nucleons together.

Now as it can't hold large nucleons, the nucleus starts emitting particles or following special processes to reduce mass or nucleons and reach a stable zone, the choice of process depends on where the nucleon is as per a graph $^3$.

$^1$.one of the four fundamental forces of nature. If there was no nuclear force, everything would repel apart. The reason being, if there was only electrostatic force between protons, the whole nucleus$^{1a}$ would repel away. So another "nuclear force", acts into play, which is blind to the charges, and acts according to another intrinsic property$^{1b}$ called color$^{1c}$ .
So now when nucleons are at the order of 1 fermi$^{1d}$ , the force is attractive and stops acting very (very) quickly (dying).
$^{1a}$ actually, only protons, to be specific
$^{1b}$ like mass, charge, etc.
$^{1c}$ and involves variety of particles called gluons, mesons, hyper-mesons, quarks, etc.
$^{1d}$ named after great scientist, $1$ fm$=10^{-15}$ m
$^{2}$$\beta^-,\beta^+,\ce{_2^4He}(\alpha)$, K-capture etc.
$^3$ which predicts that is no. of protons = no. of neutrons, then nucleus is stable ,generally, only for lighter nucleus(es) and for heavier ones it bends a little upward like a parabola ($y=x^2$)

Not the answer you're looking for? Browse other questions tagged reaction-mechanism kinetics or ask your own question.

9
Is negative activation energy possible?
3
Where does the energy required to initially begin the reaction of iron and oxygen come from?
8
Is there a chemical reaction that speeds up when the temprature gets lower?
6
How does the inverted Marcus region explain chemiluminescence?
4
Could one synthesise unsubstituted "cyclohexa-1,3,5-triene"?
2
Activated complex theory vs. consecutive reactions
2
What is a barrier-less reaction in Quantum Chemistry?