How to assign the signals in the H-NMR of Aspirin?

I need to assign the H-NMR of aspirin, below is aspirin with the H's labelled. 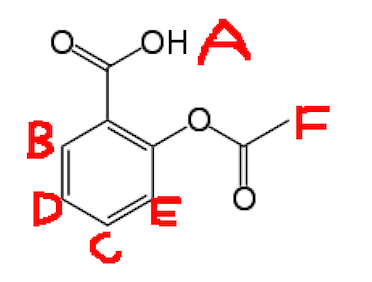 The peaks I have are:

Would E and B be doublet of doublets because they couple with D and C so they would have ortho and meta coupling?

Would D and C be coupling with each other and B and E so would they be doublet of doublets of doublets, with two ortho and one meta coupling?

Here is a link to the actual assigned proton nmr spectrum for acetylsalicylic acid. Your peak assignments are correct.

Would E and B be doublet of doublets because they couple with D and C so they would have ortho and meta coupling?

Yes, that is correct. Here is another link with more detail on the coupling constants (see p. 13 for example)

Would D and C be coupling with each other and B and E so would they be doublet of doublets of doublets, with two ortho and one meta coupling?

The first school of thought is to label a splitting pattern based on the appearance of the peaks, which is why Ron describes your aromatic peaks as doublets of triplets, and even quartet. I'm not saying this is wrong; this is just one method used. This method can cause problems for the inexperienced spectroscopist, as the appearance of a spectrum is very much dependent on the strength of the magnetic field, choice of solvent, temperature, sample preparation, quality of shimming etc. This is why experimental conditions should always be reported when publishing NMR data - and something students should be entitled to ask of their teachers when given a spectrum to decipher. What one person reports as a triplet on a 60MHz spectrometer in water might be undeniably a doublet of doublets on a 800MHz in acetone. Second order splittings in aromatic systems are a great example of this. Although common on low field systems, second order splittings are far less common on high field instruments, and many AB quartets collapse to AX spin systems at high field and couplings can be analysed as first order systems. Of course, this method makes very good sense for a number of systems. For instance, labile amine or alcohols are almost always reported as broad singlets, even though they are likely to be possess 3J couplings that are not observed through exchange decoupling.

The second school of thought (which your original descriptions of ddd adhere to) is to look at the molecule and predict the splitting that would be expected (two ortho couplings and a meta couplings for example) and describe that. You can then rationalise quite easily why a ddd looks like a triplet (here, the two ortho couplings are almost identical and fall within the natural linewidth, and so cannot be resolved and appear as a triplet). So your original suggestions are perfectly acceptable. Without seeing the spectrum you have been given, it is hard to say, but a well shimmed sample of aspirin in methanol even at medium fields clearly shows the two ortho couplings aren't quite identical, and the peak for (what you label) spin E does not look like a true triplet, with the centre line not much taller than the outside lines.

My recommendations for reporting splitting patterns and, especially, if you are reporting coupling constants, is to always report descriptions of splittings in accordance with the reported couplings. A doublet of triplets arises from an AMX2 system, and cannot have three coupling constants for spin A; only JAM and JAX. A doublet of doublets of doublets arises from an AHPX system, and will have three distinct couplings for spin A; JAH, JAP, JAX. It is perfectly acceptable for any of these to be equal, such as JAP=JAX. So, go with what you have originally suggested, and the only matter for you to consider is what typical values are for ortho (~7-8Hz) and meta (2-3Hz) couplings (and possibly para couplings - which you don't observe in aspirin, but can be ~1Hz)

3
Deducing compounds from spectroscopic data for isomers of formula C4H8O

5
What splitting pattern is this?
4
NMR and pseudorotation
3
Spin spin coupling in a proton NMR of an ester?
1
Spins spin coupling on proton NMR for an aldehyde?
2
1H NMR of p-methoxy phenol, 32 possible lines?
7
How can multiplets in para-disubstituted benzene rings be described?
4
NMR splitting of protons in a ring
0
Coupling in C-NMR