How do I figure out the relative polarity of organic compounds?

It's a question on my quiz which I guessed right and couldn't do the reasoning:

Based on the intermolecular forces, predict the boiling points of the following substances and list them in the order of increasing boiling point. State your reasons accordingly.

Right away, I see the hydrogen bond in ethanol, so it must have the highest boiling point.

I couldn't decide on the other two, so I drew lewis structures (kind of) for both 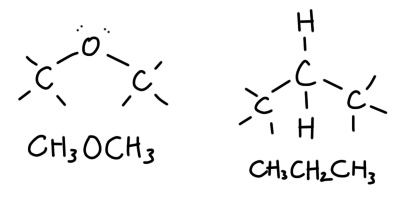 I ignored the hydrogens because they don't affect the polarity (correct me if my lewis strctures are wrong).

This is what I guessed, and I was right. When my teacher takes this question up, he said that propane is non polar, which means it only interacts via london forces, which means it has the lowest boiling points out of these three.

But how is propane non polar though, when I asked, he said "I don't have an answer for this, life is hard."

I mean, if I draw the structure in the bad way, it does look symmetrical and balanced out:

But if I draw it in this way, it doesn't help me when I'm trying to figure out the polarity, because everything will look non polar. I can even say water is in a linear shape because the H's and the O line up perfectly in a line, which is not the correct picture of reality.

My biggest question is, how do I figure out if something is polar or not.

General steps to figure out the polarity (or at least relative polarity) and subsequently the relative boiling point of compounds:

This step requires some knowledge about the geometry of hydrocarbon compounds. But it seems that you already know about the tetrahedral bonding centers of saturated hydrocarbons. This is then important later on for the dipole forces. Never try to linearize the carbon backbone just to try to make sense of this, it will do more damage than good.

The dipole moments that you have to estimate will be those along bonds. There is a larger dipole moment in the ether than the hydrocarbon without heteroatoms, because the oxygen atom is strongly electronegative. As such, there will be a dipole along the $\ce{C-O}$ bond.

These dipoles can be understood as vectors along bonds, pointing from positive to negative partial charges, and can be summed up for the total dipole moment of a molecule. The larger the absolute value of this dipole vector is, the larger the dipole-dipole interactions between molecules: Subsequently, the higher the forces between the molecules of this substance.

Check for Other Intermolecular Interactions

One other main intermolecular action is, as you already pointed out in your question, hydrogen bonding. This one is quite strong, but isn't found for every compound out there. Basically, it is when a highly polarized $\ce{H-X}$ bond can be formed, where $\ce{X}$ can be oxygen, nitrogen, chlorine or some other electronegative atom (with respect to carbon). The hydrogen that is sandwiched in the hydrogen bond has to be (formally) bonded to such an electronegative atom as well, otherwise it wouldn't be as free to create those bonds (as you also have realized, because the hydrocarbon hydrogens are really quite boring from an intermolecular interaction perspective).

Based on the steps above, we can generate a table:

The more "Yes" a substance has, the higher the intermolecular forces. Based on these data, assumed by us, we can generate a list (from highest boiling point to lowest):

Not the answer you're looking for? Browse other questions tagged intermolecular-forces lewis-structure polarity dipole or ask your own question.

18
The Lewis structure of HNO3
14
Why does silicon tetrafluoride have a higher melting point than sulfur tetrafluoride?
7
Why is tetrafluoromethane non-polar and fluoroform polar?
0
Water has H Bonds?
8
Polarity of alcohols and their miscibility in water
5
Does gas chromatography follow the "like interacts with like" rule of thumb?
7
Why are the dispersion forces in CS2 stronger than the dipole-dipole forces in COS?