I have a molecule

and i need to assign the hnmr. I have a printed spectrum 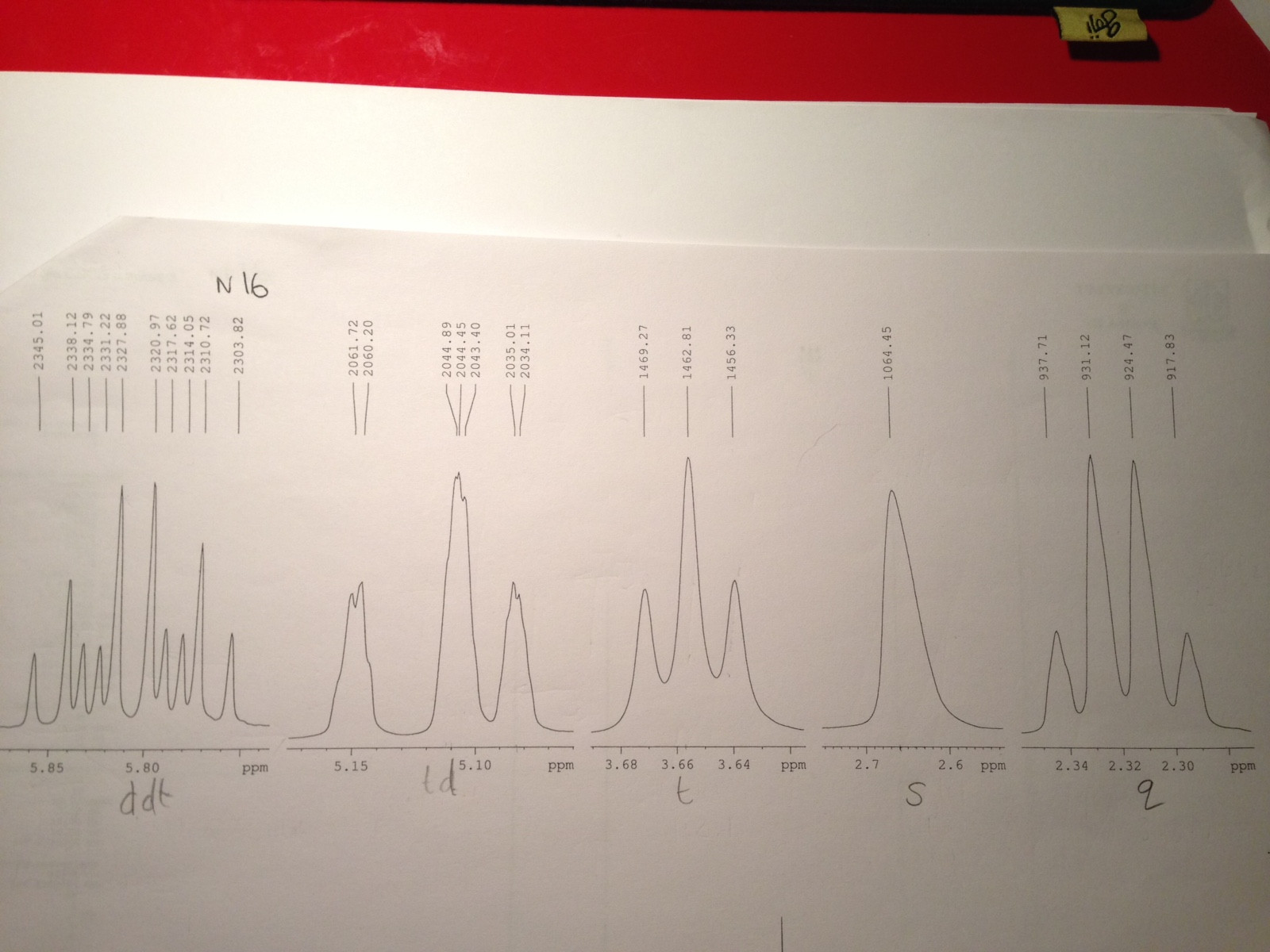 So far my answer is:

But if these are correct then does that mean the four hydrogens on carbons 2 and three are the triplet group?

You haven't quite rationailsed the spectrum correctly; If you look at your molecule you will see that you have 6 distinct 1H species, but you have only described 5. Take particular note of the signals that you have described as a td at 5.11ppm. This should be symmetrical about the centre peak if it was a true td, and this signal clearly is not. So, it actually comes from two overlapping signals; one with a large coupling (~17Hz) and the other a medium coupling (~10Hz). Also, a quartet will only have one coupling constant - this will be the separation of any of two adjacent peaks in the quartet, and so is 6.6Hz, as you have described. So perhaps this is not a true quartet.

When assigning your peaks, you should first look at your chemical shifts;

So from this information, you should be able to broadly assign the 6 protons in your molecule.

This should allow you to complete the assignment of this spectrum. See how you go from here.

A useful approach to these type of assignment problems, especially if you know the structure, is to look at the molecule and try to predict the spectrum you'd expect, rather than looking at the spectrum and working out what's what.

Looking at your molecule, I'd expect:

Edits to answer questions raised in comment to the original answer.

Below are two splitting diagrams to help you rationalise the splitting for the peaks centred around 2.3 ppm and 5.10 ppm.

Let's first look at your upfield peaks (2.10ppm), which is the splitting diagram on the left. This comes from signal Hd, and should show coupling to Hc (which will give rise to a doublet) and also He (giving a triplet). So this signal is actually a doublet of triplets. Normally if the doublet coupling and triplet coupling are quite different, then you observe two clear sets of triplet peaks. However, in this case, Jdc is approximately the same as Jde (within the natural linewisth of the peaks), and so you get overlap of some of peaks, creating what looks like a quartet. It is still a dt, with 6 lines, but you can't resolve them all. So, you still have two coupling constants, but both couplings are about 6.6Hz.

The second diagram (on the right) is for your sets of signals around 5.10 ppm. This is actually the overlap of two independent signals. Ha will occur as a dd, with cis coupling to Hc (~14Hz), and geminal coupling to Hb (~2Hz, so very small, and realy only broadens the peak in this case.) This is the signal on the right. Hb will also occur as a dd, with trans coupling to Hc (~17Hz), and again, geminal coupling to Ha. This is the signal on the left. It just so happens (life is like that sometimes), that one set of lines for each signal overlap, to create what looks like an aysmmetrical triplet. So, here are your two signals, Ha and Hb. Integrating the area under the peaks serves as a valuable tool to tell you how many signals each peak represents, and in this case you would have clearly seen that the signals at 5.10ppm come from 2 protons.

As a note, geminal couplings in vinylic systems is usually quite small, and often is of similar magnitude to allylic coupling (4J couplings, such as Jad, and this is why the peaks for protons a and b actually look a little more complicated than just doublets of doublets. The main take home message about double bond couplings at an introductory level really comes from the cis and trans couplings.

Not the answer you're looking for? Browse other questions tagged spectroscopy nmr-spectroscopy or ask your own question.

10
HNMR - Peak Splitting
3
Could I get a hint on the structure of this molecule based on HNMR spectra?
5
Determination of structure with HNMR
1
Determining Molecule Based on Proton NMR (HNMR)
6
Is there a consensus how to report coupling patterns greater than quartets?
12
Determining structure using HNMR and IR
4
CH2 group in alkyl glucoside gives two separate HNMR signals
3
Assignment of the 13C NMR spectrum of 4'-bromoacetophenone