What holds atoms together? [duplicate]

In non-nuclear chemistry, everything is electrostatic interactions. This is why you can learn and predict so much just by "following the electrons"

So the short answer to your first question is: "Molecular orbitals hold atoms together in covalent bonds, and those are a result of electrostatic interactions and the quantum nature of electrons." 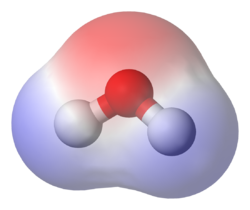 In this picture, red means "more electrons" and blue means "less electrons." Water can form hydrogen bonds, which are very strong electrostatic interactions. Some atoms and molecules have an almost uniform charge density on the surface. We call these "non-polar" molecules - noble gases are good examples. However, even noble gases have what is called an induced dipole due to statistically correlated fluctuations in electron density when the atoms are near each other. As a result, even noble gases can be cooled to the point where they become liquid - the very, very weak electrostatic interactions will hold them together at low temperature, when they are not moving very fast. These forces are called London Dispersion Forces - after the guy who first described them. London dispersion forces are important, because they are found in all molecules - polar or not. In fact, this is what makes most plastics solid. Polyethylene, for example, is made of very long chains of essentially non-polar molecules (from wikipedia):

Each chain is attracted to the others through weak London dispersion forces, however, since each chain has tens of thousands of atoms, those tiny forces quickly add up to make large forces holding the polymer together. This is why polyethylene is solid at room temperature, and can be used to make things like shopping bags!

Not the answer you're looking for? Browse other questions tagged bond atoms molecules valence-bond-theory or ask your own question.

19
What is the difference between physical and chemical bonds?
4
Is ionic bond just formed by “electrostatic” interaction between two oppositely charged ions?
5
How is the charge of covalently bonded atoms determined?
4
Cohesive forces in solid solutions
18
Why is an ionic bond a chemical and not a physical bond?
0
Can ionic and covalent bond be explained in terms of orbitals?