Why is cytosine far more vulnerable to hydrolytic deamination than both adenosine and guanosine?

Cytosine deaminates to form uracil at a finite rate in vivo

Pyrimidine bases e.g cytosine in DNA are more susceptible to spontaneous deamination than are the purine bases because there are more thermolabile.

Reference: Journal of Biological Chemistry - Nitric Oxide-induced Deamination of Cytosine and Guanine in Deoxynucleosides and Oligonucleotides

Another research article: Cytosine Deamination Plays a Primary Role in the Evolution of Mammalian Isochores agrees with the theory of temperature as the major cause of sponteneous demination in cytosine as it states:

The reaction may proceed either via attack of hydroxide on the neutral nucleobase or attack of water on the N3-protonated base: 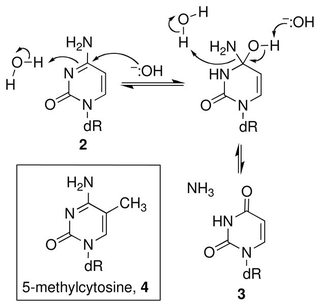 In single-stranded DNA, and at base mismatches in duplex DNA, deamination proceeds much faster (t1/2 ~ 200 years) presumably due to increased solvent accessibility of the base. Deamination of guanine and adenine residues in DNA is much slower, occurring at only 2–3% the rate of cytosine deamination.

Another factor which apparently "contributes" to susceptibilty of cytosine to hydroysis is its presence in both DNA and RNA.

DNA is not susceptible to alkaline hydrolysis while RNA is alkali labile and is readily hydrolysed by hydroxide ions. On the other hand RNA is relatively resistant to the effects of dilute acid, but gentle treatment of DNA with acid leads to hydrolysis of purine glycosidic bonds and the loss of purine bases from the DNA.

These different conditions (i.e acidic and basic conditions) to which the bases are exposed to appears to have a "double effect" on cytosine. (and additionally , as a pyrimidine it is more thermolabile)

18
Why do chalcogens (Group VI) stink so badly?
2
What does the adenosine do in ATP?
9
What happens if you autoclave HEPES?
4
Why and how does lycopene absorbance increase with heating?
10
Is lithium L-threonate a potential brain medicine?
25
Why is heroin a more potent drug than morphine, despite having a similar structure?