Determining weight-percent methanol in water from specific gravity and temperature 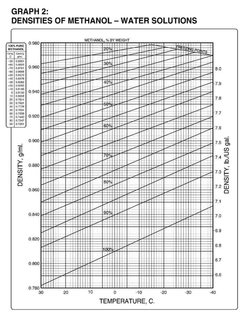 I'm trying to build a spreadsheet for operators, suppliers, and customers to measure the specific gravity at an arbitrary temperature, enter the temperature and specific gravity measured, and get the weight percent without having to interpret a chart.

In order to do this, I need some sort of formula to calculate the weight percent for any input of specific gravity and temperature (within a reasonable range anyways).

Here are the approaches I've tried so far: 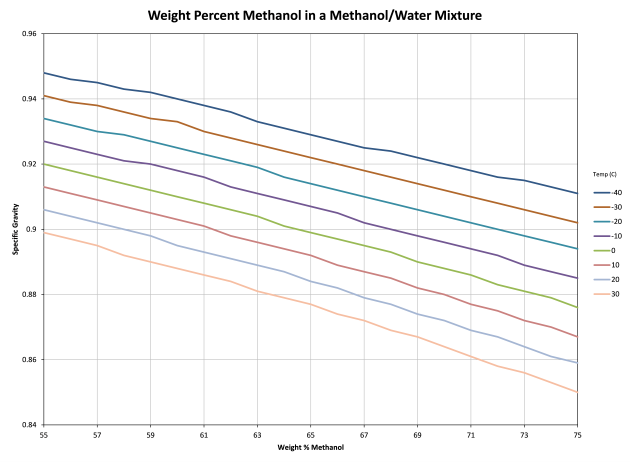 You are looking for the excess molar volumes of water and methanol. A quick Google search shows that these quantities have been determined and re-determined dozens of times. The art is to find which paper has the best values.

The CRC Handbook of Thermophysical and Thermochemical Data and Landolt-Börnstein may have done the sanity check already.

Try this equation I found in a company manual...not sure about the source but I tested it against the monographs you can find at say http://www.methanol.org/Health-And-Safety/Safety-Resources/Health---Safety/Methanex-TISH-Guide.aspx, p7 and found it to be quite good...

The 4th order fit with coefficients

Not the answer you're looking for? Browse other questions tagged water temperature mixtures or ask your own question.

16
What happens to water under high pressures without possibility of escape?
2
What is the CO2 content in the air in a compartment of air and water, as a function of temperature?
0
How to determine the specific heat of aluminum?
7
How to calculate percent error for absolute zero?
6
What is a good source for large tables on the properties of water?
3
How much time for a water molecule in pure water to reach the top of a glass of water?
0
Methanol-water mix freezing points - clarify contradictory online data > 60% w/w?