How does sugammadex (a modified cyclodextrin) draw rocuronium into its lipophilic cavity?

Sugammadex is a modified cyclodextrin: 8 member sugar ring with carboxyl thioether extensions. Rocuronium is an aminosteroid, 4 steroid rings and one protonated amine group.

Sugammadex binds rocuronium really tightly. The reason for this is straightforward - lipophilic interactions with the inner cavity of the cyclodextrin, which is the perfect size because of the thioether extensions. The negatively charged carboxylate groups lock into place with the protonated amine.

But the question asks how the rocuronium is initially drawn into the cavity, which makes less sense. I've only found one reference to this in the literature, in a figure caption that says the carboxylate groups interact with the four steroid rings.

But how? The rings are not aromatic, so there is no anion-pi interaction. One would think the positively charged amine would interact with the carboxylate groups far more often, leading to the wrong orientation. If anything, the hydrophobic rings should be repulsed by the negative charge? 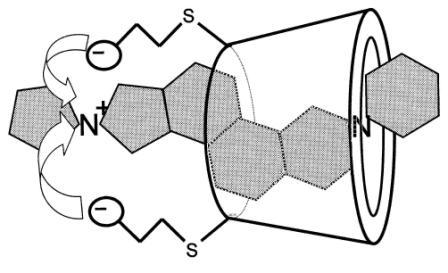 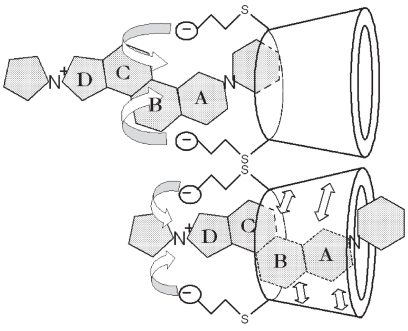 Figure 6: Encapsulation process: Sugammadex carboxyl groups interact with steroidal rings A, B, C, and D, drawing the aminosteroidal NMBA molecule into the cavity where additional non-covalent attractions hold the molecule securely in place.

After consulting with a professor, the answer seems obvious.

The two negative charges repel each other when the free cyclodextrin molecule is in solution, resulting in an "open" conformation that has the carboxylate groups facing "out". The thioether chains interact with the rocuronium as it is drawn into the large open face of the molecule. As the positively charged nitrogen moves into place, the carboxylate groups "close", and lock the drug into place.

I'm not convinced that the rocuronium molecule can be "drawn" only from that side of the sugammadex molecule (which is the substituted lower rim side, not the cavity side, but never mind, that’s pretty large γ-cyclodextrin) (but also I'm not cyclodextrin supramolecular chemistry expert).

There are some multi-level computer simulations done in China recently.[1] They have done some molecular dynamics, but they don't provide their trajectory data. Anyway, that trajectory is only several Å, from some pre-docked position to the optimized docked position.

There's a nice older study,[2] not mentioned in your reference, working with sugammadex-like compound with bulkier substituents (carboxyphenylthio instead of carboxyethylthio), and besides hypothesizing on closed and open conformations because of π-π interactions of the aromatics, they show (or remind) that rocuronium can have different conformations where the morpholine residue (at right at your graphics, opposite to the quaternary ammonium) can be either in-plane, or perpendicular to the plane, so that it can nicely accommodate, or somewhat lock-in once it enters the cavity (besides other interactions), but they seem to also assume that it's the (only) entering side, which I'm not convinced of.

Encapsulation is rather statistical dynamics process with thermodynamic equilibrium, than a sucking in.

They also have a nice X-ray structure data of the encapsulation complex,[3] but again, that's not sugammadex, exactly. Its X-ray crystal structure is in the Angew. Chem. article[4], the substrate is in the same orientation, but I think it's not because it can enter from one side only with the signle orientation only, but rather because of the electrostatic stabilization.

Not the answer you're looking for? Browse other questions tagged organic-chemistry intermolecular-forces pharmacology or ask your own question.

9
How can I draw 2,3-diethylheptane?
4
How does this brominated intermediate lose its methyl group?
7
How does fluorouracil inhibit thymidylate synthase?
11
How can I tell which parts of this example drug are necessary parts of its pharmacophore?
10
How DFT-D3 incorporates coordination number (CN) into C6
7
How does Rosuvastatin 5 S-lactone form in human body?
16
Why does graphite have a high melting point even though its intermolecular forces are weak?
2
How would one carboxylate CBG into its acid form, CBGA?