I have put some old nails and screws in the 30% sulfuric acid to prepare an electrolyte for plating. After some bubbling and horribly irritating smell (probably $\ce{SO2}$), the reaction slowed down. Overnight, beautiful green/blue crystals formed: 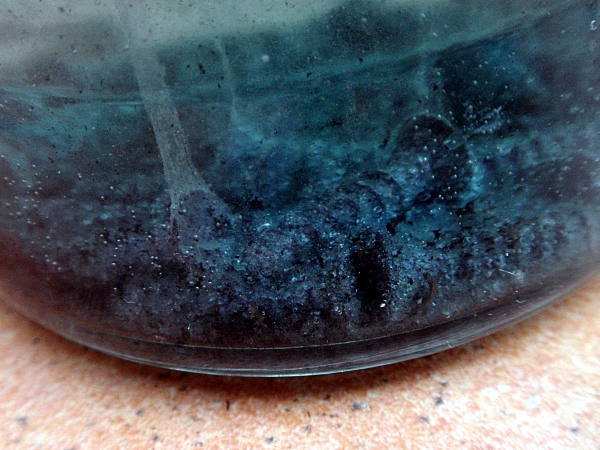 I just love them. After another day, the reaction almost stopped. I suppose the acid was all bound to iron. To continue the process, I poured some concentrated sulfuric acid into the solution. That was a big mistake - the crystals reacted with concentrated acid and formed ugly white dust: 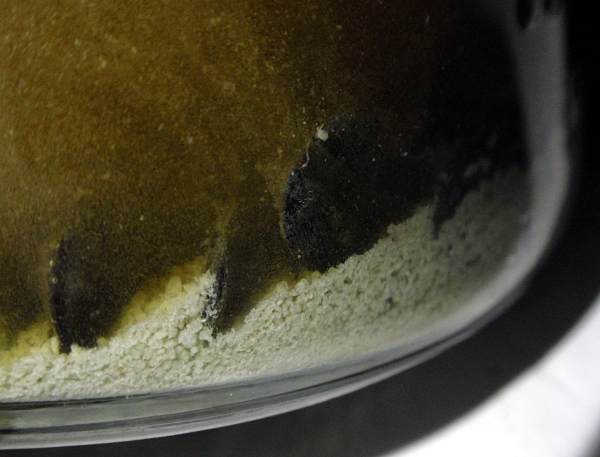 What did I create? What are the crystals and what's that dust? How to reverse the reaction? Does the dust dissolve to be electrolysed?

I realize this question is over two years old, but I have to add the correct answer here: the iron (II) sulfate you had at the beginning was in the heptahydrate form. SEVEN molecules of water for every iron (II) sulfate ion pair. Now, what do you think would happen to that crystal structure when you add one of the most powerful dehydrating agents in existence? That's right, it sucks all the water out of your crystals, and you're left with a powdery, noncrystalline form. You could have just added less concentrated acid, that was diluted enough to not be such a strong dehydrating agent.

Incidentally, iron is a surprisingly strong reducer of sulfates. I did this reaction recently and noticed gold flecks floating around in the solution. I was shocked to see gold, since I obviously never added any, until I realized that the iron had reduced the sulfate all the way down to sulfide, and what I was seeing was iron pyrite -- fool's gold. Adding more acid eliminated that almost immediately.

A quick look at the Wiki suggests that you first formed iron(II) sulfate:

which is blue-green. It is then possible that you obtained iron(III) sulfate, which is pale. But you need to oxidize the iron(II) to iron(III), which usually requires oxygen, and sulfuric acid is not an oxidizing acid. Mere exposure to oxygen works:

but I would assume not that quickly. Still, this looks like the best explanation, and perhaps some impurities managed to produce the oxidation. Just a guess.

As to how to get back the iron(II), you would need to reduce the iron(III), and given that the oxidation direction is basically spontaneous in air, this might take some work. So why not just start again with more iron and dilute acid?

I think you merely grew some Iron Sulfate crystals and then dissolved them by adding more solvent.

Depending on how much sulfuric acid you added the second time you could add a proportional amount of the same mixture of nails and screws to reform the crystals except larger. Alternately you could evaporate the acid you added by putting it on a hot plate or something. or as trb said you could just start over.

Not the answer you're looking for? Browse other questions tagged inorganic-chemistry identification or ask your own question.

2
How can I check if this mystery compound is strontium bromide?
3
Why did my iron nails not dissolve in hydrochloric acid?
2
How to differentiate magnetite from metallic iron?
3
Mixing hydrochloric acid and sulphuric acid, both concentrated
1
How do I identify the compound(s) that formed from a failed synthesis of another compound?
2
Does lead(II) chloride dissociate into Pb²⁺ and Cl⁻ ions in HCl?