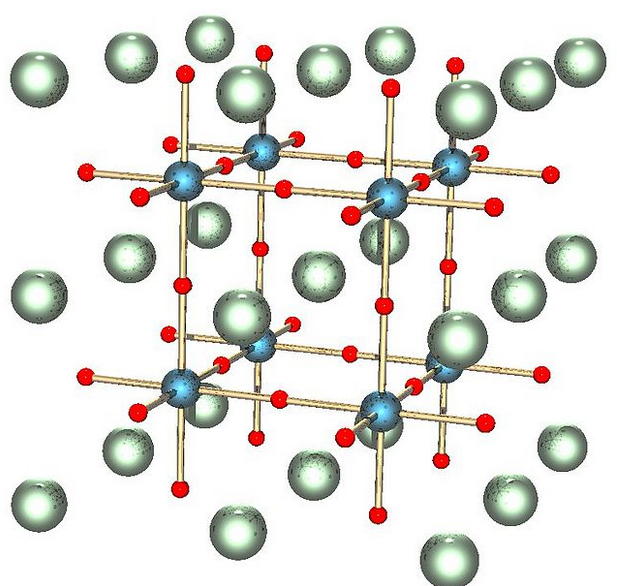 I've been reading that perovskite presents a sort of pseudocubic crystalline system, however it can be stretched and suffer modifications to become orthorhombic etc.

The thing is, if I consider it as cubic, it's sort of a combination between FCC and BCC, because it's an FCC with an atom in the center. I can't find a name for this sort of thing.

Can anyone help me out?

At Geoff's request I'll make comments into an answer:

Since it is a multi-component system you need to think of a crystal structure with a basis. Not surprisingly, the basis here is $\ce{ABO3}$. In your picture from Wikipedia, start with just the blue atoms - they form the simple cubic. Then each blue atom shares 6 red atoms with other blues, so pick three for a given blue. Then place the green atom at the cube center to go with the blue atom at the lower right front blue atom. This is now your basis, and placing that basis unit at each corner of the cube (repeating to infinity) gives you the crystal structure

To explain further: each red has two blue neighbors, so each red is 'half-owned' by a blue. For a basis, you want only whole atoms to keep your mind a bit saner, so pick three to be 'wholly-owned' by a blue, and leave the others to be owned by another blue. Taking the left lower center blue atom, I'd pick the red atoms in the +x, +y, and +z directions, then the green atom in the (x,y,z) direction to make a nice basis.

I'll also add some on deviations from cubic symmetry. If the green atom is at (1/2,1/2,1/2) than it all remains simple cubic. If the greens are big fat atoms compared to the blues, they may want a little more room, which leads to distortions. Simply stretching along one dimension is pretty easy, since it leaves 2/3's of the blue-red pairs at the same interatomic distance, stretching the other 1/3. This creates an orthorhombic crystal, still with the same $\ce{ABO3}$ unit as a basis, but now slightly elongated along one direction (commonly taken as z).