Why does NaCl form when it requires 1.52 eV of energy? [closed]

Ask Question
Asked 2 months ago
Modified 2 months ago
Viewed 155 times
-3
$\begingroup$
Closed. This question needs to be more focused. It is not currently accepting answers.

An atom of sodium has one 3s electron outside a closed shell, and it takes 5.14 eV of energy to remove that electron. The chlorine lacks one electron to fill a shell, and releases 3.62 eV when it acquires that electron.

This means that it takes 1.52 eV of energy to donate one of the sodium electrons to chlorine when they are far apart.

When the neutral Na and Cl pairs come close to each other, potential energy is released, but why is it now energetically more favorable when Na transfers its electrons with this released energy to the Cl? Wouldn't the potential energy be even more negative if they came closer and didn't transfer anything? The atoms do not "know" beforehand that if they transfer an electron they can now come even closer together and even more potential energy is released, so does it depend on the coincidence that both neutrals come so close at the beginning that these 1.52 eV lead to the electrons passing over? Is this explained by statistical thermodynamics (so many possibilities happen randomly in some kind of event space?) and can someone recommend me a good book about it? And when it is said through the loss of potential energy this 1.52eV can be produced, in what form does this potential energy go, heat? Somehow this kind of released energy must then ensure that the minimum energy for removing the electron is still applied and it must then also remain at this energy level at least, so that the electron also does not go back again.

It is always said that at the beginning energy is needed, but at the end more is released which then compensates everything again, does this initial energy then really only come from the sodium and chlorine accidentally colliding so close that the potential energy falls and thus the electron passes over and then the rest runs off?

In the first case you can essentially ignore interactions between the particles until they are within a distance of the order of the sum of their van der Waals radii. In other words, until very close the particles behave as in an ideal gas. If the neutral particles collide they might share electrons and bond covalently or, somewhat more likely, exchange an electron to form ions and an ionic bond. The actual bond that may form will be intermediate to these extremes and closer to ionic.

In the second case the particles attract strongly even at fairly large distances due to the $r^{-1}$ Coulombic potential. This is a very unstable situation. The attraction may lead to a collision if the particles do not fly too fast and too far apart.

A bond formed during a collision will be stable provided the collision energy was not too great, otherwise the particles will bounce off each other. They might then retain any charges gained through the collision. These topics are the subject of gas phase molecular dynamics. See for instance Ref 1.

When the neutral Na and Cl pairs come close to each other, potential energy is released, but why is it now energetically more favorable when Na transfers its electrons with this released energy to the Cl? Wouldn't the potential energy be even more negative if they came closer and didn't transfer anything?

Since the potential between uncharged particles changes very little as you bring them closer, whereas that of oppositely charged ones decreases much more rapidly, a transfer from the neutral to the charged potential energy curves becomes increasingly favorable as the particles get closer. Eventually the change in the attractive potential between the charged particles compensates for the cost of transferring an electron between the atoms and the transfer becomes viable and may occur spontaneously (for instance through quantum tunneling). This is illustrated in the following figure (distance is in units of Bohr radius): 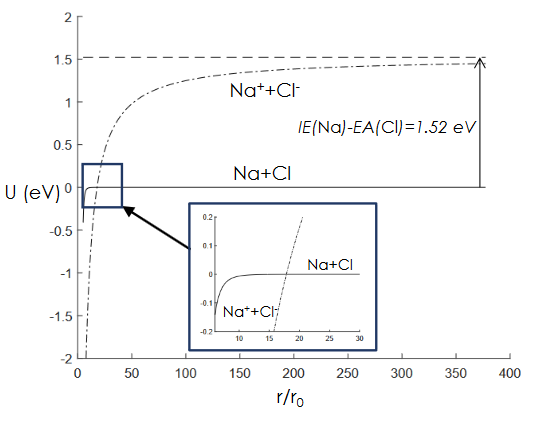 Various sites including this one report that this happens when the internuclear distance falls below 9.4 Å.

However, I have no answer for what is the probability of an electron transfer between gas phase sodium and chlorine as a function of interatomic distance. In essence that is what a large part of your post boils down to.

24
Will gaseous ionic compounds be free moving ions?
15
What is Sodium Chloride like in gas state?

17
Why does free chlorine in the stratosphere lose its ozone-depleting potential after about 100,000 reactions?
2
Why is the ionization energy for Hydrogen non-zero?
4
Why does attraction always cause release of energy making the system more stable?
1
Is collision theory applicable only for molecules?
4
Spontaneous reaction between chlorine and a hypothetical atom