My book asks me to consider reacting 1-butene with NBS and light.

I know that NBS and light leads to radical formation, and this is an allylic/benzylic bromination problem.

However, my book only provides one product.

Aren't both products expected? Actually, I would expect one product in excess (the book actually listed my minor product as the sole product). There are at least two resonance contributors, and the more major one has the more substituted radical. 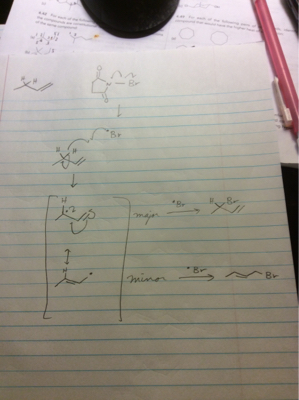 Your textbook is wrong. Both products are possible. You are oversimplifying your analysis into which product is the major product.

While a secondary radical may usually be more stable than a primary radical due to inductive stabilization from alkyl groups, this is an allyl radical and the pi bond is important.

Remember Zaitsev's Rule. Pi bonds are also stabilized by alkyl groups. So now when we compare the two resonance contributors to see which one is "more important", we need to compare two competing factors:

However, as our computational chemists will tell us, this sort of analysis is goofy because the two radicals we are comparing are the same radical. Thus a more complete picture would require some computational calculations to tell us where the "radical density" is or how the distribution of the SOMO (singly-occupied molecular orbital) compares to the van der Waals surface (in other words, which position is more sterically accessible).

I bet you forgot sterics! I do not have the capability right now to plug the butenyl radical into a modeling program and generate the convincing pictures, but I can predict what we would learn:

I would love to see some MO pictures or electron/radical density maps compared to van der Waals surfaces to confirm this.

Yes you are correct, at least two products are formed (ref. 1, ref. 2). Unfortunately, neither of these references provide the actual product distribution between the isomers.

I say that "at least two products are formed" because depending on your reaction conditions 3 products might be expected. NBS brominations can be carried out over a range of temperatures, from cold to somewhat above room temperature. The activation energy required to rotate about an allylic bond is only ~15-16 kcal/m (see here). Therefore, your 1-bromo isomer could exist as a cis-trans mixture, unless the reaction is performed at very cold conditions.