This post address the acidity of ortho and para hydroxy benzoic acid. However, what effect is there if there are two hydroxy groups ortho to carboxylic group?

I know hydrogen bonding is also at work but won't the two ortho substituents would decrease the acidity by highly destabilising the conjugate base due to steric hindrance and repulsion; as there are three big groups near to each other?

The highly electronegative O atom of the carboxyl group (which by itself in an aliphatic compound would be highly stabilised by equivalent resonating structures) forms very efficient H-bonds with the fairly acidic phenolic hydrogen atoms. The ring formation provides enough stability to favour release of a proton. 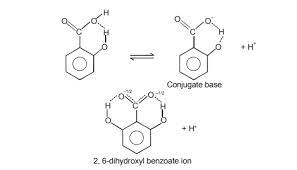 The increased acidity can also be explained by the First Ortho Effect which basically states that steric hindrance forces the carboxyl group to move out of the plane of the ring which essentially stops resonance with the phenyl ring, thus inhibiting the slightly destabilising crossed-conjugation:

P.S. I could not find a suitable source for the $\ce{pK_a}$ of $2,6$-dihydroxybenzoic acid. I would be grateful if someone adds them in the comments.

12
Why hydrogen bonding in some acids make them a stronger acid when it is present even before deprotonation?

22
Comparing acidities of substituted and aromatic carboxylic acids
13
Why can the lone pair not align with the phenyl moiety in 2,6-xylidine?
21
Are there any examples of activating meta directors?
0
Steric Inhibition of Resonance in ortho-substituted Benzoic Acids
3
Effect of chloromethyl substituent vs methyl substituent on yields of nitration